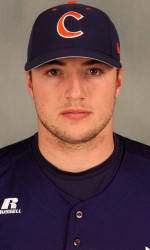 Kyle Parker’s three-run homer in the sixth inning gave the Tigers the lead and Tomas Cruz pitched 4.2 scoreless innings of one-hit ball in relief to propel #24 Clemson to a 7-5 win over Maryland in front of 517 fans at Bob Smith Stadium on a windy Sunday afternoon. The Tigers, who swept the series 3-0 and won their sixth game in a row, improved to 31-17 overall and 14-10 in the ACC. The Terrapins fell to 16-37 overall and 4-23 in ACC play.

The Tigers jumped out to a 2-1 lead after two innings, then Maryland tied the score 3-3 in the fourth inning. After the Terrapins scored two runs in the fifth inning to take a 5-3 lead, the Tigers scored four two-out runs in the sixth inning to close out the scoring.

Cruz (3-2) pitched 4.2 masterful innings in relief to earn the win. He allowed just one hit, no runs, and no walks with four strikeouts. It was also a career-long outing for the senior righthander from Amarillo, TX.

Adam Kolarek (1-3), the second of three Maryland hurlers, suffered the loss. He yielded four hits, four runs, and one walk with seven strikeouts in 5.0 innings pitched.

The Tigers grabbed the game’s first lead in the top of the first inning thanks in part to a Terrapin miscue. John Hinson reached with two outs on an error and Parker worked a walk. Jeff Schaus then laced a single through the right side to score Hinson.

In the bottom of the first inning, Jon Wilson reached on an infield single, moved to second on a balk, advanced to third on a throwing error on a failed pickoff attempt, and scored on Gary Schneider’s sacrifice fly to center.

The Tigers regained the lead in the second inning. Brad Miller led off with a walk and went to third on Wilson Boyd’s single to right field. After the next two Tigers were retired, Will Lamb grounded a single through the right side to plate Miller.

In the top of the fourth inning, Chris Epps led off with a walk, moved to second on a wild pitch, and advanced to third on an error on the throw to second. After Lamb walked, Epps scored when Mike Freeman grounded into a 6-4-3 double play.

The Terrapins scored two runs in the bottom of the fourth inning to tie the score. Schneider led off with an infield single and went to third base on David Poutier’s one-out single down the right-field line. Zach Fisher hit into a fielder’s choice that enabled Schneider to score. After Mike Rozak was hit-by-pitch, Kevin Tehansky laced a single up the middle to score Fisher.

Maryland took its first lead of the contest in the fifth inning. Alfredo Rodriguez led off with a double down the left-field line and advanced to third on Wilson’s sacrifice bunt on a 1-2 pitch. After Schneider walked, Matt Marquis singled through the left side to score Rodriguez. Schneider and Marquis moved up a base on a double steal, then Schneider scored on Poutier’s groundout.

In the sixth inning, the Tigers scored four runs after the first two batters of the frame were retired. Lamb hit a two-out single up the middle, stole second, and moved to third on Freeman’s infield single that extended his hitting streak to 16 games. Lamb scored on a passed ball and Hinson walked. Parker then belted an opposite-field, three-run homer to right field, his 17th long ball of the season, to give Clemson a 7-5 lead.

Lamb had a team-high two hits for the Tigers, who had seven hits, seven walks, and one hit-by-pitch in the game. Parker added three RBIs on his home run, while Hinson scored two runs. Miller’s 10-game hitting streak came to an end as well.

Poutier went 3-for-4 with two doubles and an RBI to lead the Terrapins, who had eight hits in the contest.

Clemson will face Furman at Fluor Field in Greenville, SC on Tuesday at 7:00 PM.