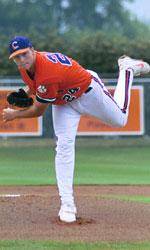 Kyle Bono raised his record to a perfect 8-0, and #9 batter Jon Cooper had a double and a homer in the last two innings, leading Central Florida to a 7-4 victory over Clemson on Saturday evening in front of 4,448 fans at Kingsmore Stadium. Clemson, ranked as high as #13 in the nation in one poll, had won three in a row and nine of its last 11 games entering the contest, but fell to 30-17 with the loss.

Central Florida, ranked #24 in the nation by Baseball America, improved to 36-11 with the victory. The Golden Knights are now 17-3 in games played on Saturday and 12-1 against left-handed starters. The same two teams will meet on Sunday at 2:00 PM at Kingsmore Stadium in the final game of the series.

Central Florida outscored Clemson 4-0 over the last two innings to gain the win. Clemson had been 26-1 when leading after seven innings entering Saturday night’s game.

Central Florida won the game even though it committed five errors on defense. It marked the second time in eight days that Clemson had lost a game in which the opponent committed at least five errors. Florida State had six errors in a Seminole victory at Clemson on May 1.

Clemson’s starter, Tyler Lumsden is a left-hander, but he did not take the loss. The Clemson junior had an outstanding outing, as he struck out 10 and walked just one. He had a perfect game through four innings, and a no hitter through five. He allowed four runs, just one earned, and gave up just three hits.

Kyle Bono got the win for Central Florida and elevated his record to 8-0 in throwing 138 pitches. He entered the game with a 1.23 ERA, third best in the nation. A sophomore from Lake Mary, FL, Bono recorded his sixth complete game of the year, but his first in a nine-inning game. Central Florida plays in the Atlantic Sun conference, which plays many seven-inning weekend doubleheaders.. The Tigers scored four runs against him, but just one was earned, so he enhanced that nationally ranked ERA.

Clemson took a 3-0 lead in the bottom of the second inning. Kris Harvey and Andy D’Alessio started the inning with singles and moved up to second and third on a sacrifice by Russell Triplett, who received his undergraduate diploma from Clemson on Friday. Tyler Colvin then singled to score Harvey with the first run of the game. Tony Sipp then hit a ground ball to short, but Jon Cooper’s throw was errant, allowing D’Alessio and Colvin to score.

Clemson held that 3-0 lead until the sixth inning. Kevin Richmond started the top of the sixth with a single, the first hit of the game for Central Florida. He moved to second on a ground out and scored when Jon Cooper’s fly ball was misplayed in right field. One out later, Matt Ray doubled home Cooper with the second run of the inning. Ray then scored on a wild pitch to tie the score.

Clemson took a 4-3 lead in the bottom of the seventh inning. Lou Santangelo reached on an error, stole second, his sixth straight steal this year, and scored on a single by Harvey and subsequent error by the third baseman. But, that would be Clemson’s last score of the night, as Bono shut the door over the last two innings.

Central Florida took a 5-4 lead with two runs in the top of the eighth. Cooper led off the inning with a double, and that hit knocked Lumsden out of the game. Collin Mahoney came in and was greeted by a game-tying single by Clay Timpner, the Central Florida leadoff batter. Matt Ray then singled, moving Timpner to third. One out later, Ryan Bono executed a perfect suicide squeeze bunt on a 3-1 pitch to score Timpner with the lead run.

Central Florida scored two insurance runs in the top of the ninth with back-to-back two-out home runs by Drake Wade and Cooper, the #8 and #9 batters in their order, respectively. Both home runs were off Clemson reliever Tony Sipp, who had not yielded a home run all year.