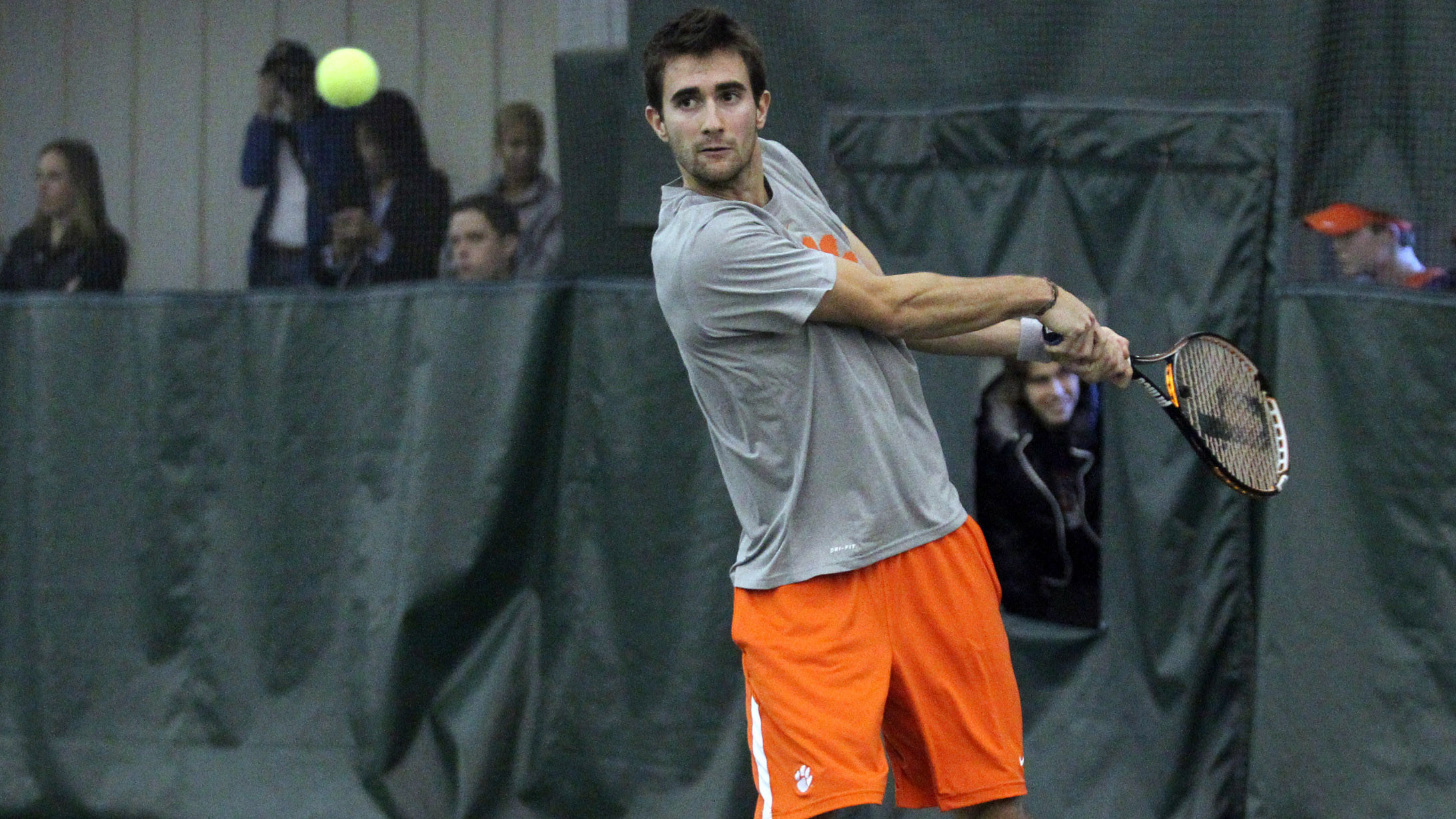 CLEMSON, SC – Hunter Harrington won his matches at both number-one singles and number-one doubles in leading 23rd-ranked Clemson to a 7-0 victory over Furman in the season opening match for the Tigers. For the 12th straight season, the Tigers won their season opener. Furman falls to 3-2 this season. The Tigers are ranked 23rd nationally according to the latest Intercollegiate Association (ITA) poll. Clemson won the doubles point to start the match. Harrington and Dominique Maden defeated Alex Christ and Joel Cook at number-one doubles 6-2. Including the fall matches Harrington and Maden are now 6-2 on the year as a doubles team. The Tigers’ doubles team of Luke Johnson and Austin Ansari defeated Jacob Behal and Adam Steryous 6-2 at number-two doubles. In singles, Harrington defeated Christ 6-0, 6-2 at the number-one position to give the Tigers a 2-0 lead in the match. Harrington is now 8-3 on the season including his fall matches. At number-two singles, Maden of Clemson defeated Matt Browne 6-3, 6-3 giving the Tigers a 3-0 advantage. Maden is 4-3 on the year and has won three straight matches going back to the fall matches. Johnson, a sophomore transfer from Florida, clinched the match for the Tigers with his 6-2, 6-3 victory over Juan Sheppard of Furman at number-four singles. Clemson won at number-three singles as Austin Ansari defeated Adam Steryous 6-3, 6-5. The Tigers’ Fernando Sala defeated Joel Cook 6-5, 6-3 at number-six singles. Sala is now 6-3 on the year with his victory. In the final match of the day, Robert Dudley defeated Jacob Behal of Furman 5-6, 6-2, 6-5 (7-4) at number-five singles to make the score 7-0 in Clemson’s favor. “I was happy with the win,” said Clemson Head Coach Chuck McCuen. “I was very impressed with the way we competed. We have 10 new players on the team, and we play together and we have come together as a cohesive unit.   The chemistry is incredible. “Winning the season opener is very important as it reinforces what you have worked so hard on in practice. We look forward to our two matches Sunday. We had a great crowd today, and it’s so much fun playing in front of a lot of people,” said McCuen. “I would have to give the game ball to Robert Dudley. He won his tiebreaker in the third set and beat a senior from Furman. Robert has worked so hard and has shown so much intensity as a freshman.” Today’s match was the 97th meeting between Clemson and Furman on the tennis courts. The Tigers hold a 78-18-1 advantage in the series that began on April 17, 1923. Clemson will play host to Presbyterian at 10:00 a.m. and Gardner-Webb at 4:00 p.m. Sunday in a double header at the indoor courts at the Hoke Sloan Tennis center on the Tigers’ campus.Clemson 7, Furman 0