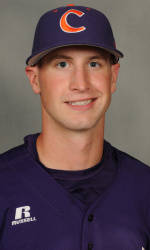 Jeff Schaus, Wilson Boyd, and John Hinson all hit home runs and freshman righthander Scott Firth pitched 6.0 strong innings in #22 Clemson’s 12-1 win over Furman in front of 3,417 fans at Fluor Field on Tuesday night. The Tigers, who won both games of the season series with the Paladins, improved to 32-17 and upped their winning streak to seven games. Furman dropped to 13-33.

The Tigers broke open a close game with seven runs in the fifth inning, keyed by a two-run homer by Schaus and a grand slam by Boyd.

Firth (1-1), who was making his second career start, set career-highs for innings pitched (6.0) and strikeouts (4) in earning his first career victory. He also allowed six hits, one run, and one walk. The Buffalo Grove, IL native allowed the leadoff batter of the game to score and a two-out double in the first inning. But no Paladin reached second base again until there were two outs in the ninth inning. Kevin Kyle, and Will Lamb combined to pitch the final 3.0 innings without allowing a run.

Furman starter Barry Benton (0-5) suffered the loss, as he yielded nine hits, eight runs, and one walk in 4.0 innings pitched.

Mike Freeman hit a one-out double to left-center on an 0-2 pitch in the top of the first inning to extend his hitting streak to 17 games. But Freeman and Schaus, who was hit-by-pitch, were stranded on base without the Tigers scoring.

The Paladins grabbed the game’s first lead in the bottom of the first inning. Will Owens worked a leadoff walk, advanced to second on a balk, and scored on Aaron Thompkins’ single up the middle.

Clemson responded with a run in the second inning. Brad Miller led off with a double down the right-field line and advanced to third on Richie Shaffer’s single through the left side on an 0-2 pitch. Miller scored on Boyd’s fielder’s choice as Shaffer was erased at second base.

In the third inning, Freeman led off with a hit-by-pitch and Schaus followed with a walk. Freeman moved to third on Kyle Parker’s flyout to deep right field and Schaus advanced to second on a wild pitch. Hinson then laced a single through the right side to score Freeman and Schaus.

Clemson added seven runs on seven hits in the fifth inning. Freeman led off with an infield single and Schaus belted a two-run homer to right field on an 0-2 pitch, his 11th long ball of the season. Parker followed with a single through the left side and Hinson ripped a single through the right side. Miller loaded the bases with a bunt single. Two batters later, Boyd lined an opposite-field grand slam down the left-field line, his fourth long ball of the season. It was also the Tigers’ eighth grand slam of the season, all by different players, and Boyd’s first career grand slam. Lamb drew a two-out walk and scored on Freeman’s double to right-center.

In the sixth inning, Shaffer reached on an error with one out. Two batters later, Kieboom walked with two outs and Lamb singled through the right side to score Shaffer.

The Tigers added a run in the seventh inning when Hinson hit an opposite-field, solo homer to left-center, his 11th long ball of the year.

Freeman tied his career-high with four hits, including two doubles, to lead Clemson, who had 14 hits in the game. Hinson went 3-for-6 with a homer, three RBIs, and two runs, while Miller added two hits and two runs. Boyd added a grand slam and a career-high five RBIs as well.

Clemson will travel to Winston-Salem, NC to play at Wake Forest in a three-game series starting Friday at 6:00 PM.