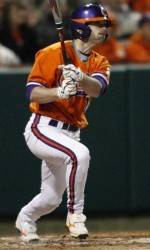 Brad Miller went 5-for-5 with a homer, double, three RBIs, and four runs and Wilson Boyd’s two-out, run-scoring single in the eighth capped a three-run inning in #22 Clemson’s 9-8 victory over #7 Florida State in front of 4,181 fans at Doug Kingsmore Stadium on Thursday night. The Tigers, who took a 1-0 series lead, improved to 35-19 overall and 16-12 in the ACC. The Seminoles dropped to 39-14 overall and 18-10 in ACC play.

Miller, who missed his first game on Tuesday against Presbyterian after starting each of the first 118 of his career at shortstop, totaled a career-high five hits, including his two-out, run-scoring double in the bottom of the eighth inning to tie the score, and a career-high four runs as Clemson’s designated hitter. The Seminoles had taken an 8-6 lead with two runs in the top of the eighth inning, but the Tigers overcame two baserunning miscues in the frame to score the tying and winning runs with two outs.

Alex Frederick (5-1), the second of four Tiger hurlers, earned the win in 2.1 innings pitched despite allowing three hits, three runs (two earned), and two walks with two strikeouts. Tomas Cruz retired both batters he faced to record his third save of the season. Starter Casey Harman struck out eight and walked a career-high four batters in 6.0 innings pitched.

Geoff Parker (3-1) suffered the loss, as he pitched the final 1.1 innings. He yielded seven hits, three runs, and one walk with one strikeout. Starter Sean Gilmartin tied his career high with nine strikeouts against a season-high and career-tying-high four walks in 6.0 innings pitched.

The Tigers grabbed the game’s first lead in the second inning. Miller led off with a single through the right side and John Nester reached on an infield single. Boyd then squared around to bunt, but he pulled the bat back and ripped a single to right-center to score Miller. Jason Stolz followed with a sacrifice fly to right field to score Nester.

The Seminoles came right back and scored three runs with two outs in the third inning to take a 3-2 lead. Tyler Holt led off with a single to left field but was erased on Sherman Johnson’s fielder’s choice. Two batters later, Stuart Tapley drew a two-out walk and Stephen Cardullo lined a 1-2 pitch to left-center for a double to score Johnson and Tapley. Cardullo then stole third and scored when the throw sailed into left field.

Jayce Boyd doubled Florida State’s lead with two outs in the top of the fourth inning when he belted an 0-2 pitch over the fence in left-center for a solo homer.

Kyle Parker led off the fifth inning with a double to right-center on a high flyball that the Seminole outfielders could not locate in the evening sky. Two batters later, Miller blasted a two-run homer to right-center, his sixth long ball of the season. It also gave Clemson at least one home run in each of the last 10 games.

Jayce Boyd tied the score in the sixth inning when he hit an opposite-field, solo homer just inside the right-field foul pole, his second long ball of the game and sixth of the season.

Florida State regained the lead in the top of the seventh inning thanks to a costly Tiger error. Tapley drew a one-out walk and James Ramsey walked two batters later with two outs. Devon Travis then grounded a ball to Stolz at shortstop, but the Tiger sophomore booted the ball and Tapley scored all the way from second to give the Seminoles the lead. Rafael Lopez then singled to left field, but Jeff Schaus threw out Ramsey at the plate to keep the Tigers within one run.

The Tigers manufactured a run in the bottom of the seventh inning to tie the score. Miller led off with a line-drive single to right field, moved to second on Nester’s sacrifice bunt, advanced to third on Wilson Boyd’s groundout, and scored on Stolz’s two-out, infield single.

In the top of the eighth inning, Jayce Boyd led off with a single to center. Two batters later, Johnson tripled to right-center just out of the reach of a diving Wilson Boyd’s to score Jayce Boyd. Mike McGee then belted a 1-2 pitch to John Hinson. The Tiger third-baseman was unable to come up with the clean catch and would have doubled off Johnson at third. Nevertheless, Hinson retrieved the ball and threw to first to retire McGee as Johnson scored on the play to give the Seminoles an 8-6 lead.

In the bottom of the eighth inning, Wilson Boyd’s then grounded a single through the right side to score Miller, giving the Tigers a 9-8 lead.

Ramsey reached with one out in the ninth inning on a walk, then Travis hit a soft liner that was headed to left-center. But Stolz made a leaping catch for out #2. Cruz then struck out pinch-hitter Ohmed Danesh swinging on a 3-2 pitch to end the game.

Miller led Clemson’s 17-hit attack with five hits, while Wilson Boyd’s went 3-for-5 with two RBIs. Freeman, Parker, and Stolz added two hits apiece for the Tigers, who had their leadoff batter reach base in seven of their eight innings at the plate. Lamb’s 11-game hitting streak came to an end as well.

Jayce Boyd went 3-for-4 with two homers and three runs to pace Florida State, who had 10 hits in the game. Holt and Lopez added two hits apiece.

Clemson and Florida State will play game-two of the series on Friday at 6:30 PM.