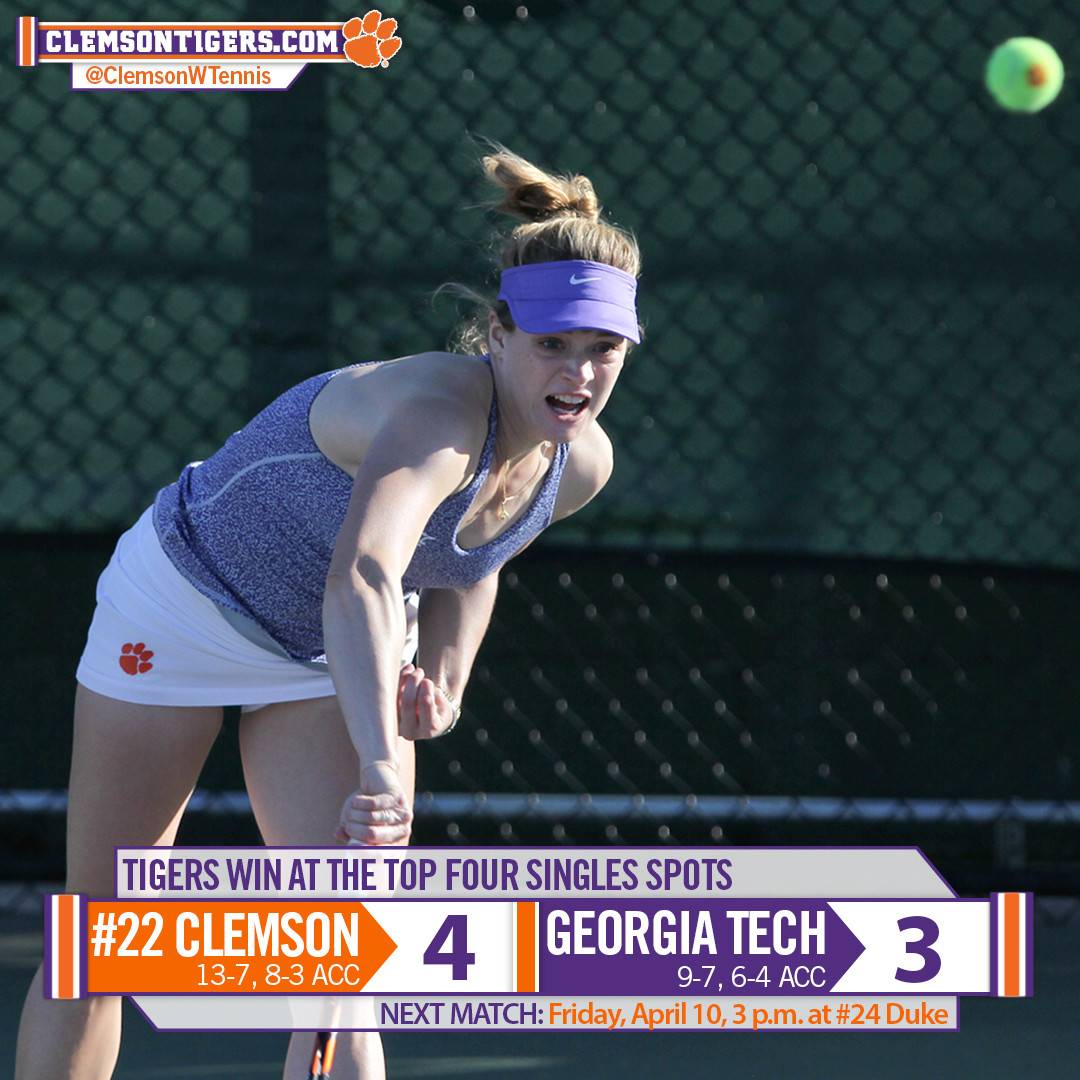 CLEMSON, S.C – After dropping the doubles point to 36th-ranked Georgia Tech, the 22nd-ranked Clemson women’s tennis team rebounded in singles play, ultimately defeating the Yellow Jackets 4-3 on a beautiful Saturday afternoon at the Hoke Sloan Tennis Center. The win was a crucial one for the Tigers in terms of conference standings, as Clemson improved to 13-7 overall and 8-3 in ACC play, while Georgia Tech fell to 9-7 overall and 6-4 in the conference.

Georgia Tech came out strong, claiming the doubles point with wins at No. 1 and No. 2. The Yellow Jackets’ 22nd-ranked duo of Paige Hourigan and Kendal Woodard upset third-ranked Beatrice Gumulya and Jessy Rompies. It was only the third dual match loss for the two seniors from Jakarta, Indonesia, who are now 13-3 (7-2 in ACC play). Junior Joana Eidukonyte and freshman Daniela Ruiz fought back from a 1-5 deficit at No. 3 doubles to tie the match at 5-5. The pair was trailing 6-7 when play was halted.

Gumulya, ranked 84th, and Rompies, ranked 119th, came out quickly in singles play, winning in straight sets to give the Tigers a 2-1 lead, before Ruiz fell on Court 6. Gumulya and Rompies both improved to 8-3 in ACC play with their wins today. After dropping her first set 6-4, senior Romy Koelzer rebounded to win the next two sets, 6-4, 6-2, for the victory at the top singles spot, putting Clemson up 3-2 as a team. The win was the sixth out of the last seven singles matches for Koelzer, who is ranked 35th nationally. Eudikonyte sealed the Tiger win with a three-set victory at No. 2 singles, 6-3, 3-6, 6-4. Today’s win was the eighth in a row for Eidukonyte, who is 29-5 overall, 16-2 in dual matches and 10-1 in conference play on the season.