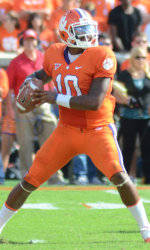 Tigers Have Each Other’s Back in Win over No. 11 FSUBy Will Vandervort, IPTAY Media

CLEMSON, SC – Senior Rennie Moore had a sack on Florida State’s final offensive play and Clemson ran out the clock to preserve a thrilling Clemson victory against the 11th ranked Seminoles. It was the highest ranked team Clemson has beaten at home since the Tigers beat a third ranked Seminoles team in 2003.

With the game hanging in the balance and the with the Seminoles’ facing a fourth-and-nine from their own 38, defensive tackle Rennie Moore plowed through the line and sacked quarterback Clint Trickett for a 9-yard loss, sending the 82,000 in Death Valley into a frenzy.

“That was such a huge, huge play,” Clemson Head Coach Dabo Swinney said. “We didn’t come after him, (Moore) just won the matchup. What a big hit to win the game. That’s what you dream about.”

But there is no dreaming. The reality is Clemson is 4-0 for the first time since 2007, thanks to a big-play offense that racked 455 yards against the nation’s fifth-ranked defense, and a defense that held the `Noles to 29 yards rushing and made the necessary stops to win the game when it had to the most.

Sammy Watkins had another incredible game with 141 receiving yards on eight catches and scored two touchdowns. He now has a Clemson freshman record six touchdown receptions in just four games.

The Tigers, now 1-0 in the ACC, had one another’s backs all afternoon. After Florida State (2-2, 0-1) took its only lead with on a Dustin Hopkins 32-yard field goal on its first drive, the Clemson offense responded with a 24-yard Tajh Boyd to Watkins touchdown and a 7-3 lead on its first series.

After a stop by the defense, the Clemson offense again struck, this time capping an 8-play, 77-yard drive with a one-yard run from Boyd for a 14-3 lead.

When the defense gave up a touchdown to cut the lead to four, the Tigers again responded as Boyd found tight end Dwayne Allen open in the flats for a 12-yard touchdown, and a 21-10 lead with 11:31 to play in the first half.

Clemson really stood tall following a fluke touchdown that allowed the Seminoles to pull within four points, 21-17, early in the third quarter. Boyd, who had not thrown an interception since the first half of the Troy game, scrambled out of the pocket following an FSU blitz. After avoiding the sack with a spin move, he tried to keep his balance. As he was going to the ground he decided to throw the ball away, but the ball came out of his hand and shot straight in the air where FSU defensive end Bjoern Werner snatched it and rumbled 25 yards for the touchdown.

But Boyd’s teammates had his back.

“I really didn’t get in that rattled stage because guys were coming up to me and asking me if I was `okay and not to worry about it,'” the Clemson quarterback said. “It’s one of those things where you have to keep responding.

“That is one of the things I’m growing up with. It’s about responding in certain situations. I got a lot of support from the whole team. They told me to come out and make some more big plays and that’s what I did.”

Boyd, who finished the afternoon 23-of-37 for 344 yards and three touchdowns, did make those plays. First he led the Tigers on an 11-play, 70-yard scoring drive which ended with an Andre Ellington one-yard touchdown. Then following another FSU score–a 30-yard Trickett to Rashad Greene pass–Boyd hit Watkins in stride for a 62-yard scoring play that gave the Tigers a 35-23 lead with 13:06 left.

That touchdown pass followed a key third down conversion in which he hit Allen with a 12-yard strike on third-and-10 from his own 20 to keep the drive alive.

“That was the play of the game,” Swinney said.

“We have a lot of playmakers out there, and we have playmakers behind those playmakers,” Boyd said. “It’s pretty fun.” And then it was even more fun when the Clemson defense stood tall and made the play to end the game.

“(FSU) had to go get a touchdown,” Swinney said. “Our motto is `We win two-minute on defense.’ I just felt like we could hold them.”

And that’s exactly what they did.