Note: The following appears in the August 2019 issue of Orange: The Experience.

The third time’s the charm, so they say. That is exactly what Michaela Franklin is hoping for as she enters her third season as Clemson head volleyball coach this coming fall.

Franklin and the Tigers will look to build on top of one of the best turnaround seasons in program history from 2018. Last season, Clemson saw a 12-win improvement from 2017 after achieving an overall record of 19-15, which was good for the most wins in a single season since 2012. The Tigers also secured two postseason victories, a first in program history, with wins over Alabama A&M and Radford in the National Invitational Volleyball Championship (NIVC). On top of that, three returning Tigers in Brooke Bailey (Second Team), Gabby Easton (All-Freshman) and Solei Thomas (All-Freshman) earned ACC postseason awards in 2018, which marked the first time since 2011 Clemson collected three ACC postseason selections.

“I think our mission stays the same with our continued pursuit of our program’s philosophy, and that is ‘Championship Behavior,’” said Franklin. “We can’t get distracted with who we’re returning versus players we’re bringing in. We have an opportunity to do something pretty special, but we have to keep sight of what’s important, and what’s important is Championship Behavior and that we represent what Clemson Volleyball is all about.”

Championship Behavior, the mantra Franklin has set forth for the program, is being the best person, teammate, student and volleyball player one can be.

“Our summer read that we gave the team this season was “The Hard Hat: 21 Ways to Be a Great Teammate” by Jon Gordon,” Franklin said. “What I really appreciate about that book is it reemphasizes Championship Behavior in a different way. It talks about how ‘well-done is better than well-said,’ and I think one of the other things we’re going to focus on is how we’re going to continue to work hard and not expect anything in return because working hard isn’t just what we do; it’s who we are.”

In addition to their offseason reading, the Tigers had quite the summer. The team took an 11-day tour across Europe, visiting Ireland, Northern Ireland, Hungary, Slovenia, Croatia and Italy. While overseas, Clemson competed against various European national teams and, of course, experienced some sightseeing as well.

“I think this spring and summer was a very unique one for us because we had a full roster on campus,” said Franklin. “We improved from a skill standpoint, but we also grew from a mentality standpoint. As far as the foreign tour, it was great to bond as a team, and a lot of the players got to visit a new country for the first time. It was a once-in-a-lifetime opportunity to be able to connect our newbies and our returners in such a unique setting.”

Looking ahead to the fall, the Tigers are set to return 12 players from the 2018 roster, only one of which did not see the floor last season, 2017 All-ACC outside hitter Kaylin Korte. Korte suffered an ACL tear in the Tigers’ 2018 exhibition match against Furman, forcing her to miss the entirety of what would have been her true junior season. Korte is set to take to the hardwood for the first time since the Tigers’ final match of 2017, when she totaled 16 kills in just three sets against Miami.

Franklin said, “We couldn’t be more excited for Kaylin to come back and join us. I’m not sure I want to call it a comeback because even though she may not have been on the court, physically, for us, she still did a great job leading our team last season. It was also a great way for her to learn and grow as a leader. If I know anything about Kaylin Korte, it’s that she’s a winner and a fighter.”

Joining Korte as one of team’s three captains, or what Franklin has coined Chief Energy Officers (CEOs), are Bailey and junior middle hitter Alyssa Deloney.

“Alyssa has done a great job this offseason,” said Franklin. “She wants to work hard and earn everything, which is why she is so respected by her teammates and coaching staff. Brooke got a ton of experience for us last year. It was her first year playing at Clemson and in the ACC. I think it takes a year to fully understand our system and the conference. Not only was it her first year trying to figure everything out from a volleyball standpoint, but she was also a leader for us. There was definitely a learning curve for her last year, and she did a phenomenal job. Now that she has the experience, we’re really excited for what this year is going to present for her.”

Last year, Franklin welcomed nine newcomers, but this season Franklin has just four: junior Jori Radtke and freshmen McKenna Slavik, Annika Clark and Maddie Wilmot. Radtke is a transfer from Northern Illinois, where she earned First Team All-MAC honors in 2018. The Hawthorn Woods, Ill., native recorded 15 double-doubles and ranked seventh in the league in kills (3.21 per set) as an outside hitter. Radtke was also a 2018 Academic All-MAC and MAC Distinguished Scholar selection. 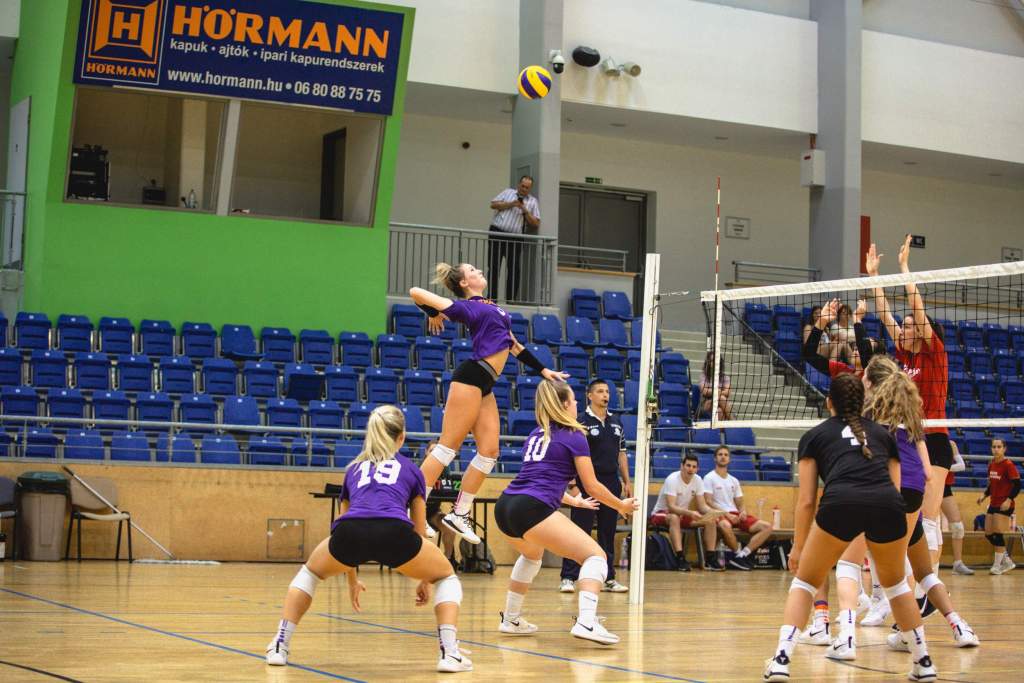 Slavik and Clark hail from Chicago, and they were club teammates prior to becoming Tigers.

Slavik is a 6-foot-1-inch setter and was tabbed a 2018 American Volleyball Coaches Association (AVCA) Under Armour All-American honorable mention. Clark is currently the tallest Tiger on the 2019 roster at 6 feet 3 inches. The middle blocker was a 2018 Dukane All-Conference selection for Wheaton North High School. Wilmot is the first Clemson player to hail from the West Coast under the direction of Franklin. The defensive specialist/libero from Encinitas, Calif., played for Wave Volleyball Club, which won three consecutive Southern California Volleyball Association (SVCA) titles from 2015-17.

“As a collective, I think they’ve already brought some positivity to the gym,” Franklin said. “I feel like our gym has elevated because they may be young players, with three of the four being freshmen, but they all come from high-caliber clubs and possess a good base of training. We’ve already been very impressed with their volleyball skills as well as their maturity as young players on the court.”

Franklin announced the Tigers’ 2019 fall schedule this past spring, which is highlighted by 15 regular-season home matches, including two home tournaments, in Jervey Gym. The Tigers’ schedule features eight 2018 NCAA Tournament teams, 10 AVCA top-50 teams and 14 AVCA top-100 teams. Clemson will begin its 2019 campaign by renewing an old rivalry, as the Tigers will challenge Georgia in Jervey Gym on Friday, Aug. 30, to kick off the annual Big Orange Bash tournament. Clemson hits the road for the first time Sept. 5-6, as Franklin will lead her Tigers to her alma mater in Manhattan, Kan., for the K-State Invitational, where they will face the Wildcats, Nebraska-Omaha and Central Arkansas. After a midweek home matchup against Appalachian State on Sept. 10, Clemson will host its second and final tournament, the Clemson Classic, against in-state rival South Carolina, which the Tigers defeated in a 2019 spring exhibition match, and 2018 NCAA Tournament quarterfinalist Wisconsin. Clemson rounds out its non-conference slate at Minnesota’s Diet Coke Classic, which will also feature Oral Roberts. The Gophers won back-to-back matches in the NCAA Tournament last season and finished fourth in the nation in RPI.

“We were on the road a lot last year, so it’s going to be nice to play in Jervey a little bit more this fall,” said Franklin. “I really like the strength of our schedule, and I believe our team is ready for the challenge it presents. It’s what we need to do if we’re going to take that next step as a program.”

In addition to its robust non-conference slate, Clemson will face each ACC team at least once and challenge Georgia Tech, Syracuse, Virginia and Virginia Tech in home-and-home series. The Tigers open conference play in Jervey Gym on Friday, Sept. 27, against the Eagles of Boston College. Perhaps what Franklin is most looking forward to during ACC action will be the launch of the ACC Network, which will broadcast two Clemson Volleyball matches nationwide on linear television. The first airing is in Jervey Gym against Georgia Tech on Oct. 9 and in the Tigers’ regular-season finale at Syracuse on Dec. 1.

“The ACC Network will continue to put Clemson Volleyball on the map, but more importantly, it’s a very positive thing for ACC Volleyball and helping our conference propel forward. I think we have a lot of strong coaches in our conference that are helping it develop and grow, and the ACC Network will help put us on the national scale a little bit more than in years past.”

No matter the challenges and opportunities the upcoming season presents, Franklin believes her team is up to the task, because Championship Behavior is not about results; it is about putting in the work, trusting the process, and remembering “well-done is better than well-said.”

“I tell our team all the time I believe they’re ready for this challenge,” Franklin said. “If you want to see what you got, you have to go against the best, and I definitely feel like our schedule reflects that. I think it also presents great opportunities for playing at home as well as the challenge of going on the road with a healthy combination of both.”