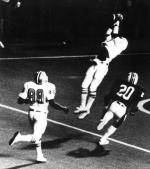 It had been a long drought at Clemson going into the 1977 season. No bowl game since 1959 and only one winning season in the previous nine years. Plus, to open the season, the Tigers had lost to defending ACC Champion Maryland in Death Valley, 21-14. However, anyone who was around the football team got the sense that there was a new excitement and confidence among the players.

In 1977, I was a sophomore on the Clemson soccer team. Even though the football program had struggled, in the bottom floor of Jervey Athletic Center where both our respective locker rooms were located, you couldn’t help but notice the change in the football program.

“In 1977, we were much more mature, confident and business-like in our approach to football,” said Steve Fuller who would be the 1977 ACC Player of the Year as a junior quarterback. “We were going to get better in large part due to the successful recruiting classes Clemson had beginning in 1974. Plus, although it is a process that I would recommend you should utterly avoid at all costs,” laughed Fuller, “through two losing seasons, we had learned from our mistakes under fire. We just needed to taste some success on the field.”

In the training room we shared, there was no mistaking that a transformation had taken place in the spring and accelerated into the fall. Even my talented soccer teammates from South America, the Middle East, the Caribbean and Africa who didn’t grow up with American football instinctively knew that the football team had developed a winning attitude. Plus, one of our teammates would play a key role in the football team’s success.

The quiet metamorphosis started in December 1976 when the late Charlie Pell was elevated to head coach after being the Clemson defensive coordinator. Pell brought in seven new assistant coaches including Danny Ford. Ford, Jimmye Laycock, and Joe Kines, went on to be collegiate head coaches. Mickey Andrews went on to be the defensive coordinator on several Florida State national championship teams.

“From an offensive perspective with the talent we had, we all felt confident we were going to be successful,” said Fuller who is today a partner of the Colleton River Development Company in Hilton Head. “However, the new offensive system under Coach Laycock seemed better suited to the type of talent we had on the team. As a unit, we were excited about the possibilities after spring practice and heading into the season.”

However, after the opening loss to Maryland, the Tigers headed to Athens, GA on September 17 with an 0-1 record. Georgia was the defending SEC Champion and Clemson had not won in Athens since 1914.

“Going into the Georgia game, we felt we had a chance,” recalled Fuller. “We had played well against a good Maryland team. We knew the Georgia game was going to be a test to see where we stood as a football team. It turned out to be a grind it out game that wasn’t too much fun to watch. It came down to a bunch of young guys finding a way to win.”

The soccer team was scheduled to play Alabama-Huntsville the following day, so I sat in my dorm room in Norris Hall listening to Jim Phillips. It was an overcast, wet day. The game was scoreless at halftime and you could hear students outside talking in cautiously optimistic tones. Georgia’s 41-0 win in Death Valley in 1976 was still fresh on everyone’s mind.

In the third quarter, tailback Lester Brown scored on a three-yard run to put Clemson ahead, 7-0. The Clemson defense continued to dig-in as the game seemed to inch along at a snail’s pace. The Bulldogs were relentless as was their trademark under Head Coach Vince Dooley. The Bulldogs came back to score on a seven-yard pass with 20 seconds left. Dooley went for the victory but the two-point conversion pass fell harmlessly to the ground in the end zone.

As the final gun sounded, you could hear the roar of the Clemson fans in Sanford Stadium. Meanwhile, Clemson students commenced their own celebration on campus. Students came out of their dorms finding countless ways to make noise and cast aspersions in the direction of the state of Georgia. Music seemed to blare from every window. You could hear car horns all across campus. Spontaneous parties sprang up everywhere. Downtown taverns became loud, boisterous and packed.

“That was the first ‘light up a cigar in victory’ game,” said Fuller of Coach Pell’s tradition started at Georgia of handing out victory cigars. “We really came together as a team that day. You got a sense that everyone understood that we were going to live and die together as a group.”

A throng of students and fans waited to greet the team when it arrived back at Mauldin Hall. Clemson students celebrated with characteristic staying power throughout the night. I remember because it was difficult to get to sleep as celebrations periodically erupted on the quad.

“The next week was much more fun going to class,” said Fuller who was later an NCAA Post-Graduate Scholarship winner. “After two losing seasons and feeling like you had been letting everybody down, it felt good to be able to stick your chest out a little bit. From that point on, there was a connection between the students, the fans, and the players. Everybody knew we were headed in the right direction.”

The Georgia game launched the Tigers on a seven-game winning streak. The 18-year bowl drought ended when Clemson earned a berth in the Gator Bowl following a thrilling 31-27 comeback win at South Carolina thanks to the immortal, last second Fuller to Butler touchdown pass. Clemson finished 8-3-1 in 1977 and followed up with an 11-1 season in 1978.

Looking back, the seeds of rebirth for Clemson football were planted by a group of talented, young players who suffered through two losing seasons during trial by fire. Those players and their perseverance were first validated on that memorable, historic day in Athens. The game set the tone for a decade of football greatness at Clemson. From 1977 to 1989, the Tigers averaged winning nine games a season and won the 1981 national championship,

Oh yeah, by the way, we beat Alabama-Huntsville 4-0 the next day in soccer and went on to an undefeated regular season. I remember there was a deafening silence all across campus on that September 18. There also weren’t quite as many students as usual at our game. I figure a lot of them were sleeping in.

David McGrew played soccer at Clemson from 1976 to 1979 and worked in the Clemson Sports Information office. After graduating from Clemson, he worked in the Athletic Department at the University of Georgia for three years before entering private business. Today, McGrew is President and CEO of MCS Marketing, Inc. and lives with his wife and two young children in Akron, OH.