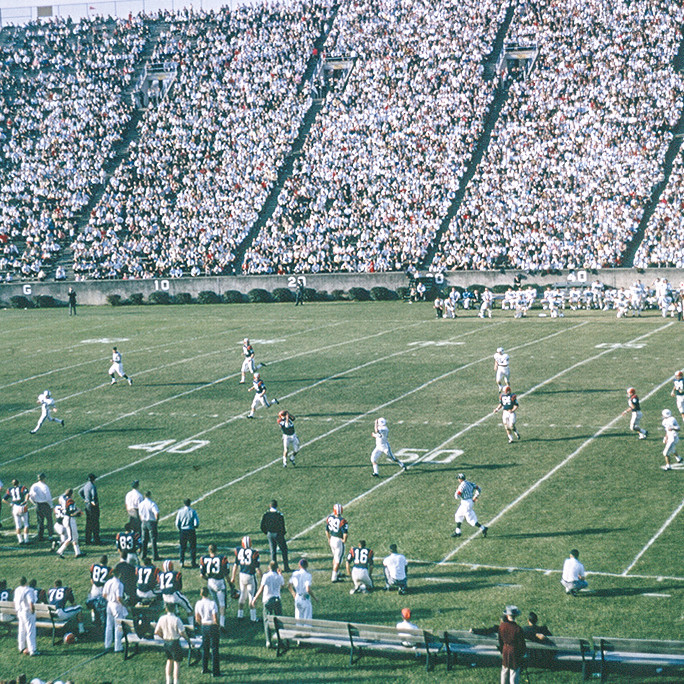 Without a “breather” on the schedule and coming off its worst season since 1952, the 1965 Tigers won their first ACC championship in six years thanks to a stout defense and a physical run-oriented offense. The team finished with a 5-5 record, with three of the losses coming in November by a combined 11 points.

Actually, the 1965 Tigers shared the title with NC State, the only time in ACC history the championship teams had three league losses.

Officially, Clemson had just two league losses. South Carolina played two ineligible players during the 1965 season, and the league made the decision that all games it played would be forfeited. As a result, the Tigers finished with an official league record of 5-2, the same as the Wolfpack.

However you view it, it was a championship season, and the recruitment of some stellar freshmen bode well for the future. Clemson would go on to win the 1966 and 1967 ACC titles as well, a first for the program and head coach Frank Howard.

With all those star players, Thomas Ray was named team MVP. He totaled 1,019 passing yards and had many outstanding performances. Phil Rogers was the top receiver as a sophomore with 36 catches for 466 yards and Mauldin led the ball carriers with 664 yards.

The season got off to a good start at home with a win over NC State. On their second series, the Tigers moved the ball 75 yards in 13 plays, with Ray scoring from two yards out.

While NC State took advantage of a Clemson fumble to score a tying touchdown after a 26-yard drive in the second quarter, the Tigers’ steady play in the second half netted a second touchdown by Ray from the five and a diving score from the two by fullback Bo Ruffner. The final score was Clemson 21, NC State 7.

The following week at Virginia, it was Ray and Ruffner again who led the offense to a 20-14 win over the Cavaliers.

Touchdown passes by Ray to end Wayne Bell in the third and fourth quarters gave Clemson win No. 2. The fourth-quarter score was a 16-yarder and came with just 2:06 left, giving Clemson its ninth straight win over the Cavaliers.

Consecutive weeks on the road against SEC powers Georgia Tech and Georgia quickly put Clemson on its heels with a pair of losses. By 1965, the ACC’s “800 rule” began to take effect from a talent standpoint. ACC schools could not take a student-athlete who scored less than 800 on the SAT, while SEC schools could. As a result of the inequity, not a single ACC team was ranked in the final AP top 20 between 1962-71.

Clemson came back with consecutive wins on October 16 at Duke and October 23 against TCU. To say defense was the key would be an understatement. The Tigers won at Duke 3-2, then defeated TCU 3-0. Both games were played during the week of the World Series and the combined scores of Clemson’s games were lower than the contests between the Dodgers and Twins. It is the only time the Tigers have won consecutive games by scoring just three points.

Frank Pearce made just four field goals that entire 1965 season, but he provided the game-winners in those contests against Duke and TCU.

Clemson had just eight first downs and 147 yards of offense at Duke in front of 31,000 fans at Wallace Wade Stadium. Duke had nearly double the total (286), but the Blue Devils’ only score came on a safety.

The next Saturday at Clemson, the Tiger defense was the most dominant of the season. The Horned Frogs had just two first downs, among the lowest ever against Clemson, and gained only 72 yards of offense in 43 plays.

Clemson upped its ACC record to 4-0 with a 26-13 win over Wake Forest behind a ground attack that totaled 187 rushing yards. Wake Forest passed for 199 yards, but many came in a catch-up time period.

The Tigers lost their last three games, but still claimed a part of that ACC crown. Many from the 50-year club are in attendance today to celebrate that season.