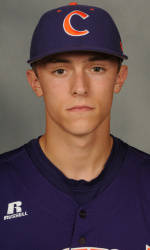 The Hokies took a 5-0 lead in the first inning, but the Tigers battled back to take a 6-5 lead with four runs in the fourth inning. The two teams traded runs before Clemson tied the score 8-8 in the top of the eighth inning. But Ryan’s clutch hit in the bottom of the eighth proved to be the difference.

Kevin Kyle (0-1), the third of four Clemson pitchers, suffered the loss. He yielded a double and run in 0.1 innings pitched.

The Hokies wasted little time taking the game’s first lead in the first inning. Michael Seaborn drew a one-out walk and Steve Domecus followed with a single to left field. Austin Wates then lined a single to center to plate Seaborn and Domecus went to third on centerfielder Addison Johnson’s fielding error. Ronnie Shaban drove home Domecus on a groundout, then Tim Smalling walked with two outs. Buddy Sosnoskie came through with a three-run, line-drive homer to left field to up Virginia Tech’s lead to 5-0. It was Sosnoskie’s 10th long ball of the season.

In the second inning, leadoff batter Kyle Parker reached on a fielding error by third-baseman Brent Zimmerman. Brad Miller followed with a two-run homer to right-center, his seventh long ball of the year.

Jeff Schaus reached on a fielding error by Seaborn at second to lead off the top of the fourth inning and Parker walked. Miller lofted a deep drive to right-center, but the wind helped keep the ball in the park and Schaus advanced to third base on the flyout. John Hinson followed with a single to right field to score Schaus. John Nester reached on another fielding error by Zimmerman at third that allowed Shaffer to score the go-ahead run.

In the bottom of the fourth inning, Smalling led off with a single through the left side, then Sosnoskie grounded a single up the middle on an 0-2 pitch. Rash, a freshman from Anderson, SC, hit a chopper to Hinson at third. Hinson’s throw to second base was errant, allowing Smalling to score on the play to tie the score 6-6.

The Hokies regained the lead in the fifth inning. Wates hit a one-out single to center on a 1-2 pitch and scored on Shaban’s double to right-center.

Rash doubled Virginia Tech’s lead when he led off the sixth inning with a long solo homer to left field, his fifth home run of the year.

Schaus cut Virginia Tech’s lead in half when he hit a towering solo home run to right filed in the seventh inning. It was his 15th long ball of the year.

In the top of the eighth inning, Miller led off with a walk on four pitches. Two batters later, Shaffer lined a one-out double down the right-field line to advance Miller to third. Pinch-hitter Chris Epps grounded out to shortstop, allowing Miller to score the tying run.

However, the Hokies regained the lead in the bottom of the eighth inning. Rash grounded a one-out double over the third-base bag. Two batters later, Ryan laced a two-out single up the middle to score Rash.

In the ninth inning, Mike Freeman hit a one-out single through the left side on a 3-2 pitch after fouling off five straight 1-2 pitches. Schaus grounded out to advance Freeman to second with two outs, then Parker ripped a ball between first and second base. However, Shaban made a nice stop and raced to first for the game-ending out.

Wates had a game-high three hits and two runs for the Hokies, who outhit Clemson 13-7. Sosnoskie went 2-for-3 with a homer and three RBIs, while Domecus, Smalling, and Rash added two hits apiece.

Schaus and Shaffer had two hits apiece for Clemson. Both of Shaffer’s hits were doubles, while Schuas, Parker, and Miller scored two runs apiece.

Clemson swept the Hokies in a three-game series in Tigertown earlier in the season, but it fell to 8-14 in games decided by two runs or less in 2010. The Tigers also scored at least eight runs for the sixth game in a row.