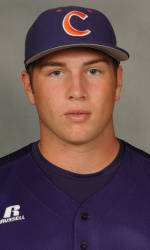 Will Lamb pitched 6.1 strong innings and freshmen Richie Shaffer and Spencer Kieboom combined for five hits, three RBIs, and five runs to lead #16 Clemson to a 9-3 win over #6 Georgia Tech in front of 3,725 fans in the ACC Tournament at NewBridge Bank Park on Saturday. The Tigers, who ended their ACC Tournament action with a 1-2 record, improved to 38-21 on the season. The Yellow Jackets, who were also 1-2 in the ACC Tourney, fell to 45-13 in 2010.

Lamb (4-4) earned the win against one of the nation’s most-potent offenses. Lamb, who was making his first start on the mound since April 18 when he faced the same Yellow Jacket club, allowed just six hits, two runs, and two walks with four strikeouts in 6.1 innings pitched. It was also his first win since he defeated top-ranked Virginia on the road in the first game of a doubleheader on March 27. Dominic Leone and Kevin Brady combined to fan six batters in the final 2.2 innings pitched, including 2.0 perfect innings with four strikeouts by Brady.

Georgia Tech starter Jed Bradley (9-4) suffered the loss, as he gave up seven hits, five runs, and one walk with two strikeouts in 4.2 innings pitched.

Clemson grabbed the game’s first lead in the first inning. Mike Freeman lined a one-out single to right-center but was erased at second base on Jeff Schaus’ fielder’s choice. After Schaus stole second and Kyle Parker reached on a two-out, infield single, Shaffer belted an opposite-field, three-run homer to right field, his fourth long ball of the season.

The Yellow Jackets dented the scoreboard in the top of the fourth inning. Matt Skole lined a one-out single to left-center and scored on Cole Leonida’s double off the padding of the left-field foul pole.

Clemson responded with a run of its own in the bottom of the fourth inning. Shaffer grounded a one-out single through the left side, then he advanced to third base on back-to-back balks. John Hinson lined out to left, allowing Shaffer to score on the sacrifice fly to give Clemson a 4-1 lead.

In the fifth inning, Kieboom led off with an infield single and advanced to second on a wild pitch. Centerfielder Addison Johnson, who earlier made two catches at the wall to rob Georgia Tech batters of extra-base hits, reached on an infield single to first base when Bradley failed to leave the mound to cover first. After Brad Miller walked to load the bases with no outs, Freeman ripped a liner to center, but right at Jeff Rowland. Kieboom still scored on the sacrifice fly, but the Tigers were unable to add to their 5-1 lead.

The Yellow Jackets put their first leadoff batter of an inning on base in the top of the seventh inning when Jay Dantzler led off with a double to left-center and moved to third on a wild pitch. After the next two Georgia Tech batters were retired, Rowland laced a two-out single through the left side to score Dantzler. Derek Dietrich singled through the left side, but Clemson escaped further damage when Leone struck out Tony Plagman swinging on a 3-2 pitch down and out of the strikezone after being down in the count 3-0.

Clemson added to its lead in the bottom of the seventh inning. Kieboom led off with a single through the left side and advanced to second on Johnson’s sacrifice bunt. Miller then belted an 0-2 pitch off the wall in center for a triple to score Kieboom. It also extended Miller’s hitting streak to 10 games. Freeman flared a 3-2 pitch to left field for a single to plate Miller.

Skole hit the first pitch of the top of the eighth inning over the fence in right-center for a solo home run, his 19th long ball of the year.

In the bottom of the eighth inning, Parker led off with an opposite-field, solo homer to right field, his 19th home run of the season. Shaffer reached on a fielding error by Skole at third and advanced to third base on Hinson’s single through the left side. After Hinson stole second and Jason Stolz struck out for out #1, Kieboom belted a hard one-hopper, but it was right at Dietrich, who held the runners and threw to first for out #2. Johnson was hit by a 2-2 pitch to load the bases, then Miller reached on an infield single to score Shaffer and up Clemson’s lead to 9-3.

In the ninth inning, Brady retired all three batters in order, including two by strikeout, to end the game.

Kieboom, a freshman catcher from Marietta, GA, tallied a game-high and career-high three hits and two runs in just his second career start to lead Clemson, who had 13 hits in the game. Shaffer went 2-for-4 with a three-run homer and three runs, while Miller and Freeman both totaled two hits and two RBIs. Parker added two hits, including a home run, and two runs for Clemson, who was 6-for-11 with runners in scoring position. The Tigers also scored at least eight runs for the seventh game in a row.

Skole paced Georgia Tech’s 10-hit attack by going 2-for-3 with a homer, double, and two runs.

Clemson will await word from the NCAA Baseball Committee on the 16 NCAA Regional host sites on Sunday at approximately 3:30 PM on the BottomLine of the ESPN networks and online at NCAA.com. Then on Monday at 12:30 PM, the 64-team field will be announced on ESPN.