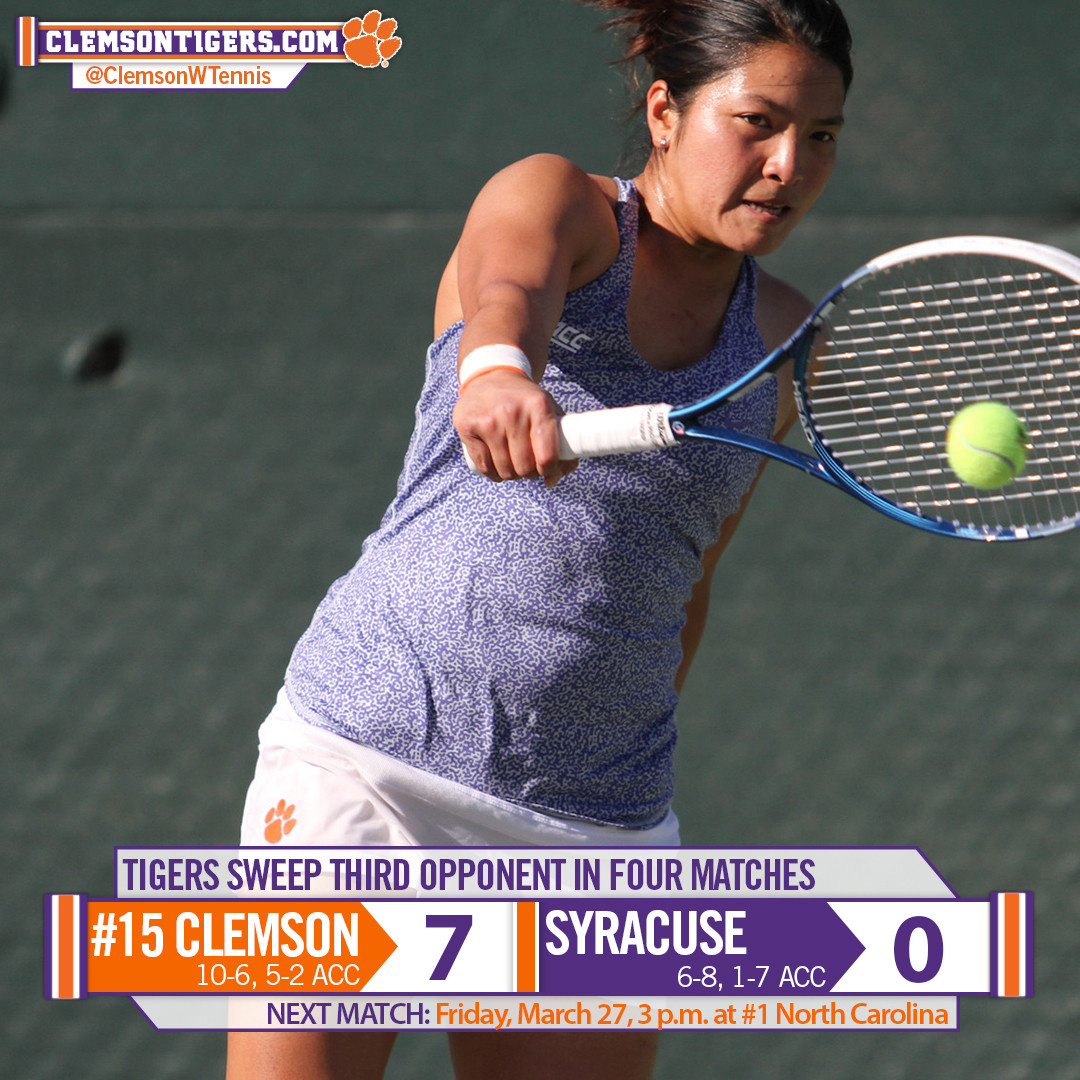 #15 Tigers Sweep Syracuse on the Road

SYRACUSE, N.Y. – Just 48 hours after being narrowly edged by No. 8 Virginia at home, the 15th-ranked Clemson women’s tennis team rebounded with a 7-0 sweep of Syracuse on the road on Sunday afternoon. The 7-0 sweep was the Tigers’ third in their last four matches, and improved the team’s record to 10-6 overall and 5-2 in ACC play. The Orange fell to 6-8 (1-7 ACC) with the loss.

Joana Eidukonyte and Daniela Ruiz won 8-4 at No. 3 and Tristen Dewar and Romy Koelzer, ranked 72nd nationally, won 8-3 at No. 2 to secure the doubles point for the Tigers. With the win, Eidukonyte and Ruiz improved to 14-4 on the season, including 8-3 in dual matches and 5-2 in ACC play.

Eidukonyte, ranked 24th in the country, continued her hot play in singles, winning 6-4, 6-0 over her Orange opponent at No. 3, and improving to 25-5 on the season, including 12-2 in dual matches and 6-1 in conference play. Dewar claimed a 6-4, 6-0 win at No. 5, followed by Koelzer’s 6-4, 6-1 win at No. 1 to give the Tigers four points and clinch the victory. Ruiz and Jessy Rompies both won in straight sets at the six and four singles slots, respectively, to make it 6-0 Clemson.  After dropping her first set at No. 2, Beatrice Gumulya recovered to win the second set and third-set super tiebreak to complete the Tiger sweep. With their victories over the Orange, Gumulya and Rompies now have 19 singles wins apiece this season, as Gumulya improved to 19-8 and Rompies to 19-5 overall.

Clemson hits to road again next week for two matches in the state of North Carolina. The Tigers face the undefeated and No. 1-ranked Tar Heels on Friday, March 27 in Chapel Hill, before heading to Raleigh to take on NC State on Sunday, March 29.