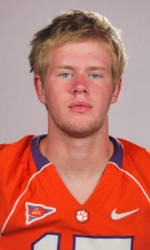 GREENSBORO, NC – North Carolina senior quarterback T.J. Yates and Maryland junior free safety Kenny Tate headline a list of eight players honored as the Atlantic Coast Conference football players of the week, announced Tuesday by the ACC. Yates threw for a career-high 412 yards against LSU, setting a league record for most yards thrown by a quarterback in a season opener. Tate helped the Terrapins secure a 17-14 win against Navy as he stopped quarterback Ricky Dobbs on a fourth-and-goal from the 1 with 34 seconds remaining, maintaining the lead for Maryland.

OFFENSIVE BACK – T.J. Yates, North Carolina, QB, Sr., 6-4, 220, Marietta, Ga. (Pope) Georgia native T.J. Yates completed 28 of 46 pass attempts for a career-high 412 yards and three touchdowns in North Carolina’s 30-24 loss to LSU in the Chick-fil-A Kickoff Game in Atlanta. Down by 20 points entering the fourth quarter, Yates connected on a 97-yard touchdown pass to Jheranie Boyd with 10:34 remaining, then tossed a touchdown to Erik Highsmith in the back corner of the end zone with 2:32 left. The 97-yard pass to Boyd is the longest play from scrimmage in UNC history, topping a 93-yard pass play in 1987 and a 95-yard run in 1891. Yates’ attempts (46), completions (28) and yards (412) are the third-highest single-game totals in UNC history. He also had no interceptions against the Tigers.

CO-OFFENSIVE LINEMAN – Zebrie Sanders, Florida State, RT, Jr., 6-6, 307, Dayton, Ohio (Northmont) Making his 24th start – 23rd at right tackle – Sanders earned a team-high grade of 90 percent for his performance against Samford. The 6-6 307, Ohio native earned grades of 95 percent on passing plays and 85 percent on running plays. He led the Seminoles’ veteran offensive line with two knockdown blocks and did not have a missed assignment or collect a penalty. FSU rolled up 481 total yards (296 pass/185 rush) and averaged 9.1 yards per play (7.1 rush/13.5 pass). He was an integral part of a unit that did not commit a penalty or yield a sack.

CO-OFFENSIVE LINEMAN – Oday Aboushi, Virginia, OT, So., 6-6, 295, Staten Island, N.Y. (Xaverian) Aboushi started his first contest for the Cavaliers, leading the offensive line with seven pancake blocks. He helped Virginia rush for 205 yards after the Cavaliers only topped the 200-yard rushing total once in 2009. Virginia averaged 5.9 yards per rush. Aboushi was part of an offensive line that allowed just one sack Saturday after surrendering 41 in 2009.

DEFENSIVE LINEMAN – Joe Vellano, Maryland, DL, So., 6-2, 285, Rexford, N.Y. (Christian Brothers Academy) Vellano, making his first career start, came through with several crucial stops on the interior of the defensive line. The sophomore had 10 tackles, including five solo stops, as well as 3.0 tackles for loss and 2.0 sacks. His sack of Navy quarterback Ricky Dobbs on third-and-7 at the Maryland 11-yard line early in the first quarter forced the Mids to attempt a field goal, which they missed. Vellano was a part of the line that helped make four goal-line stops, including one on a fourth-and-1 at the end of the game to preserve a 17-14 Maryland victory.

DEFENSIVE BACK – Kenny Tate, Maryland, FS, Jr., 6-4, 220, Forestville, Md. (DeMatha) Tate made a number of key plays in Maryland’s win Monday. Not only did the junior notch a career-high 12 tackles, but he also forced a pair of fumbles. None of his tackles was more important however, than the last one as Tate stopped Heisman candidate Ricky Dobbs on fourth-and-goal from the 1 with 34 seconds left, allowing Maryland to hang on for a 17-14 win. One of Tate’s forced fumbles also stopped a scoring drive. On the opening possession of the second half with Navy driving to tie the game, he knocked the ball free from Dobbs on a first-and-goal play from the 4 and Maryland’s Ryan Donohue recovered.

SPECIALIST – Dawson Zimmerman, Clemson, P, Jr., 6-2, 205, Lawrenceville, Ga. (Brookwood) Zimmerman established a Clemson single game record for net punting when he averaged 51 yards per boot in Clemson’s win over North Texas. He had six punts for 309 gross yards and allowed just three punt return yards. His 51.5 gross average was fourth best in Clemson history and currently leads the nation. His day included a 79-yard punt, the second longest punt in Clemson history and best since 1973. Zimmerman was named National Punter of the Week by the College Football Performance Awards for the first weekend of college football.

ROOKIE – Lamar Miller, Miami, RB, r-Fr., 5-11, 210, Miami, Fla. (Killian) Miller led the Hurricanes with 122 all-purpose yards in his debut. He paced Miami’s rushing game with 65 yards on 11 carries and scored his first career touchdown with a 5-yard run in the third quarter. He added 34 yards on kick returns, 15 yards on punt returns and eight receiving yards.