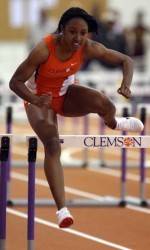 Women’s Track & Field Moves to No. 7 in National USTFCCCA Rankings

CLEMSON, SC – The women’s track & field team moved up two positions in the national indoor rankings, according to figures released by the U.S. Track & Field and Cross Country Coaches Association on Tuesday. Clemson, who began with a No. 9 preseason ranking on Jan. 5, is ranked No. 7 in the latest ratings assembled by the coaches organization.

The Tigers have a number of prominent student-athletes that rank among the top 10 in the nation across multiple events. The rankings include not only this season’s best marks, but also personal indoor bests for eligible student-athletes.

The highest-ranked performer in any event is Liane Weber, currently No. 4 in the pentathlon. She was an All-American in the event last year by virtue of her sixth-place finish and ACC-record total of 4,235 points at the national indoor meet.

Clemson has multiple NCAA qualifiers so far this season, including one automatic in Patricia Mamona. She ranks fifth in the nation in the triple jump rankings, followed closely by April Sinkler who ranks seventh. Sinkler missed the automatic qualifying mark by one centimeter two weeks ago at Virginia Tech.

Sinkler ranks among the nation’s top ten in the long jump and high jump as well, both courtesy of marks from the 2009 indoor season. She was named ACC Performer-of-the-Week following the Virginia Tech Invitational when she qualified for NCAAs provisionally in three different events.

Freshman hurdler Brianna Rollins, also an ACC Performer-of-the-Week earlier this season, ranks 15th nationally in the 60m hurdle rankings. She had a time of 8.25 at the Clemson Invitational, the second-best time in school history and an NCAA provisional qualifying time. She also anchored the 4x400m relay to an NCAA time at Virginia Tech, and the group currently ranks 13th in the nation in the event with a time of 3:36.63.

The team will return to action this weekend for the Clemson Games.