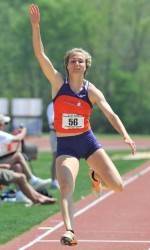 Women’s Track & Field Moves to No. 6 in National Rankings

CLEMSON, SC – Clemson has achieved its highest ranking of the 2010 outdoor season in women’s track & field, according to calculations released Tuesday by the U.S. Track & Field and Cross Country Coaches Association (USTFCCCA). The Tiger women climbed two spots to the No. 6 position in the country, its highest ranking since a sixth-place calculation on Mar. 9, the final poll prior to indoor nationals. Oregon, Texas A&M and LSU continue to hold down the top three spots in the women’s rankings.

This marks the sixth straight week the women’s track & field team has been ranked during the 2010 outdoor season, and 14th overall week ranked among the nation’s top 25 (including indoor season).

Also on Tuesday, the USTFCCCA released statistics concerning the national leaders in terms of entries into the upcoming NCAA Outdoor Championships. Clemson’s women had a total of 28 entries, through 18 different student-athletes, for all rounds of the NCAA outdoor national meet. The total was tied for third nationally among women’s track & field programs. Only Nebraska and Texas A&M had more with 31 apiece.

Clemson has several performers ranked within the top 10 nationally of various events. The highest-ranked athlete is Liane Weber, sitting at No. 2 in the heptathlon after posting an ACC Championship value of 5,928 points. April Sinkler is tied for fifth in the high jump (6’1.25″) and tied for eighth in the long jump (21’1.25″) heading into the preliminary rounds. Patricia Mamona is currently No. 5 in the nation in the triple jump (43’7.75″). Stormy Kendrick, Clemson’s lone freshman to rank in the top 10 nationally in an event, holds the eighth-best time (11.25) in the 100m dash.