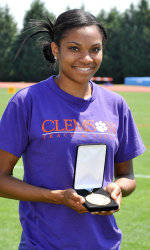 What could Clemson’s women’s track & field program possibly do for an encore?

Last season, the Tiger women earned their first-ever sweep of the ACC indoor and outdoor team championships. Clemson finished in the top 20 at both the NCAA indoor and outdoor nationals. The program produced one NCAA champion and 17 All-Americans.

“The team that we have now may be even better than the team we had last year,” said Lawrence Johnson, Director of Track & Field.

That should certainly be a scary thought for the Tigers’ competition. Clemson won both the indoor and outdoor conference meets by wide margins – over 50 points each time.

This time around, however, the Tiger head coach expects a stiff fight at the indoor meet. Clemson will be without three of its best student-athletes – Michaylin Golladay, Patricia Mamona and Liane Weber – until the start of outdoor season. The trio exhausted their indoor eligibility last season, but will return in the spring to lead Clemson’s talented group.

After displaying her talents during indoor season, Kendrick took her performance to another level outdoors. She was ACC runner-up in both the 100 and 200-meter events, and then led the Tigers’ 4x100m relay to a fourth-place finish at the NCAA Championships. Kendrick established a Tiger female record in the 100m dash with a time of 11.25 seconds.

Her top achievement came after the season when she won a pair of gold medals for Team USA at the IAAF World Junior Championships. When she won the individual gold in the 200m dash, she became just the second Clemson female in history to win a world junior event.

“Stormy will lead the charge for our sprint group,” Johnson said. “She’s hungry to announce her presence on the NCAA level.”

One of the top talents on the overall team is Rollins, also a standout hurdler. Rollins was the ACC indoor 200m champion and led the 4x400m relay team to a conference crown and All-America finish as well. The ACC’s top freshman suffered a stress fracture in her back, and was forced to red-shirt the outdoor season. The Tigers still won the team title at the ACC Outdoor Championships by over 50 points, despite being down one of the league’s most dynamic athletes. A healthy Rollins will give the Tigers the top short sprint group in the ACC and one of the best in the country.

“We look forward to having Brianna back,” Johnson said. “She changes the dynamic of our team, from open sprints and hurdles to relays. We’re much better with her on the team.”

Brittany Pringley was a member of the standout 4x400m relay team in 2010 and was also the ACC’s outdoor runner-up in the 400 meters. With a year under her belt, Rollins’ former high school teammate is poised to shine as an individual this season.

Jasmine Edgerson was a common denominator in both All-America and ACC champion relay teams a year ago. She was the anchor leg for the Tigers’ thrilling victory in the 4x100m event at home last April. Edgerson will be a factor for both relay teams again, while also increasing her individual workload in the sprints and hurdles.

The two newcomers most likely to contribute in the sprints are Marlena Wesh and freshman phenom Whitney Fountain. A transfer from the University of Oklahoma, Wesh was an NCAA Preliminary Round qualifier in the quarter mile and an All-Big XII runner in the event as well. Wesh will compete in both the 200 and 400 for the Tigers, as well as the relay units.

Fountain could make the biggest splash of any incoming freshman in the ACC. A dynamic all-around athlete, the Bronx native is expected to compete in not only the sprints, but also the hurdles, jumps and multi-events. Fountain was the runner-up in both the 55m and 200m dash events at the 2010 National Scholastic Indoor Championships. She also clocked the nation’s top time in the 300-meter event among high school athletes.

Another strong area of the 2010-11 women’s track & field team will be the hurdles. Clemson returns every one of its top athletes in both hurdle events this season, while gaining the services of a red-shirted standout, a pair of transfers and another heralded freshman in Bridgette Owens.

When healthy, Rollins was the top hurdler on the Clemson squad last season. She was an All-American in the 60m hurdles after establishing a Tiger record 8.17 in the event. She is also a former 400 hurdle champion in high school, but did not get to display her prowess in the event last spring due to the untimely injury.

Golladay has just one season of eligibility remaining, the 2011 outdoor campaign. Last year, the Clemson graduate blossomed into one of the league’s best high hurdlers. She set the Tiger record in the 100m hurdles with a time of 13.07 at the NCAA East Prelims, and then experienced great postseason success by earning a silver medal in the event at the NACAC U23 Championships. Golladay also helped the 4x100m relay to an ACC championship and All-America showing.

“Michaylin’s confidence is way up,” Johnson said. “She is focused on becoming an ACC champion this year and letting nothing stand in her way.”

Owens is among a handful of athletes that can contribute for Johnson’s team in the high hurdles. The native of Oakpark, MI was the national runner-up in both high hurdle events as a high school senior in 2010.

Others looking to contribute in the high hurdles are transfers Briana Johnson and Janice Jackson. Johnson competed for San Diego State the past three seasons and was All-Mountain West as a junior in both the 60 and 100 hurdles. Gracia transferred from SC State, while Jackson has recovered from a torn ACL suffered prior to enrollment last summer.

Sonni Austin is the squad’s top returning intermediate hurdler. She is fourth on Clemson’s career charts in the event and performed well at the NCAA East Prelims, finishing just two positions outside of qualifying for the outdoor national meet. Austin was an integral part of the Tigers’ 4×4 success in 2010 as well.

Fountain won a silver medal at the 2009 USA Junior Olympic Championships in the 400 hurdles, and she could be an asset in the event for the Tigers during outdoor season.

When discussing the Tigers’ prospects in the distance area, all talk begins and ends with Kim Ruck. A junior and original walk-on from nearby Greer, SC, Ruck elevated her game last season to the level of an individual ACC champion and All-American in the 5K. Ruck, known for her outstanding work ethic, had a great showing during the fall cross country season as well. She finished sixth at the Southeast Regional, which solidified a bid for Ruck to the NCAA Cross Country Championships in November.

While Ruck deservedly receives most of the attention among the distance group, several veterans and rookies have shown the ability to provide a supporting role. Alyssa Kulik and Stephanie Buffo made strides in the steeplechase last season, where both rank 1-2 in the Tiger record books. Kulik was named to the All-Southeast Region team after a 25th-place finish to end the cross country season.

Among the newcomers, Alyssa Henshaw (Darnestown, MD) and Natalie Anthony (Randolph, NJ) have shown the most promise.

Few teams in the NCAA can match the quality of top-end talent that Clemson possesses in Mamona and April Sinkler. Last season, the two combined to earn an NCAA crown, six All-America certificates and seven All-ACC accolades.

This season will be the final call for Mamona, who claimed the eighth individual NCAA championship in Clemson women’s track & field history last spring when she won the outdoor triple jump title. She hit a mark of just under 46 feet, but she soon surpassed that mark after an eighth-place finish at the European Championships. Mamona was the ACC’s Outdoor Field Athlete of the Year in 2010 and a third-team ESPN the Magazine Academic All-American as well.

While her primary focus will be on repeating as NCAA champion in the triple jump, Mamona will also contribute to the Tiger team during conference championship season by competing in the high hurdles, open long jump and multi-events.

“Patricia has a different walk about her right now,” Johnson said. “She’s poised to be really special this year. She can do it all for us.”

By all accounts, Sinkler could very well be the most versatile field event athlete in the nation. She is a standout in the high jump and both horizontal jumps. She owns three ACC championships apiece in the high jump and long jump, and also collected four All-America accolades last season alone in the long jump and triple jump. Sinkler is a three-time ACC meet MVP, one shy of the Clemson record of four set by Kim Graham.

Sinkler, the school record-holder in both the high jump and long jump, gained confidence over the summer after capturing a pair of bronze medals at the NACAC U23 Championships.

“April has one gear, which is full speed,” Johnson said. “She does her part for our team at the ACC championship meets and the results speak for themselves. She complements Patricia pretty well.”

Jasmine Brunson returns for her sophomore season and should again make an impact in the long jump. She was a scorer at both ACC championship meets last season, and ranks inside the school’s top 10 performance list in both the indoor and outdoor long jump. Brunson will see more work as a triple jumper this season.

Fountain should also be in the mix in the long jump. She jumped a personal best 20’11.25″ in high school.

Returning to the Tiger lineup in the pole vault is junior Amy Morrison, who shared All-ACC honors last season with teammate Caroline Kennedy. A fantastic athlete, Morrison should be ready to make a leap in the event after clearing a personal best and school record 12’11.5″ last indoor season.

Lauren Terstappen will be counted on to help fill the void left by Kennedy, the only vaulter in school history to surpass 13 feet. Terstappen, a former gymnast from Phoenixville, PA, won a pair of state championships as a senior and cleared 12’5.5″ in 2010 as well.

The Tigers will take a hit with the loss of Danielle Curry.

Curry has one outdoor season and two indoor seasons left. She was an NCAA participant in the shot put last spring, the first female in Youngstown history to advance to the national outdoor meet. She won six Horizon League individual championships from 2008-10, including five in the shot put alone. Curry will also be a factor in the discus throw for the Tigers.

The biggest question mark among this group is the health of two-time All-American Weber. After establishing an ACC record en route to winning the conference heptathlon crown last April, she suffered a torn tendon in her foot and was still walking with a boot when fall semester began.

“A healthy Liane Weber is capable of winning the national championship,” Johnson said. “Getting her back on the track and healthy will be huge for us. She has made some strides and we expect her to be ready to go in March.”

Weber has just one outdoor season of eligibility remaining. Her effect on the team was felt at both championship meets last season when she captured the women’s multi-event titles with conference records. She also placed fifth in the pentathlon at the NCAA Championships. A terrific all-around student-athlete, Weber was a first-team ESPN the Magazine Academic All-American last season.

Karine Farias, a sophomore from Brazil, will lead the multi-events group in Weber’s absence. Farias was a scorer at both ACC championship meets last year and already sits fourth in Clemson history in the pentathlon after accumulating 3,709 points last winter.