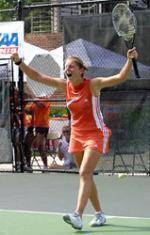 CLEMSON, SC – The Clemson Tigers women’s tennis team is ranked 12th in the latest Intercollegiate Tennis Association poll released on Apr. 26. The squad compiled an 18-8 overall record this season and won eight of 10 regular season conference matches. Clemson competed in the 2005 ACC Tournament on Apr. 22-23 and now awaits an NCAA Tournament bid. Regionals will be held on May 13-15 at locations to be announced at a later date.

Senior Julie Coin remained at number two in the ITA singles rankings for the fifth straight poll. She boasts a 32-4 overall record for the 2004-05 season and a 23-2 mark in dual matches. Her only two losses of the spring season came to #1-ranked Megan Bradley of Miami.

Romy Farah jumped 13 spots to #58 in the singles rankings after posting a 15-9 mark in the regular dual season and winning both of her matches in the ACC Tournament. She has a 24-11 overall record for the fall and spring seasons.

Two Tiger doubles teams were listed in the ITA doubles poll. Coin and Alix Lacelarie are ranked #13. They have won seven of eight matches in the dual season and are 10-2 overall. With Farah, Coin is listed at #26 in the poll. The duo has compiled a 16-4 overall mark and a 12-3 record in dual play.