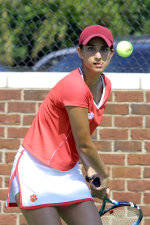 The Clemson women’s tennis team is ranked 13th in the most recent ITA poll released Tuesday. The Tigers are 10-6 on the season with a 3-1 record in ACC play. Clemson has notched victories over #4 UCLA, #18 Harvard, #24 BYU, #24 South Carolina, #32 Wake Forest, #47 South Alabama, #61 VCU, #71 NC State and Virginia Tech so far this season. Clemson is riding a five-match winning streak, with all five wins over ranked opponents.

The Tigers’ top singles player, senior Julie Coin, remains ranked second in the singles poll. She owns a 24-2 overall record and a 15-0 mark in dual action. Coin, from Amiens, France, is 17-0 against ranked opponents, inclyding two-set victories over players ranked #7. #9, #10, #14 and #20. She has lost only four sets in the fall and spring seasons combined and has not lost a set in her 24 wins. Her only two losses of the 2005 season occured in the semifinals of two fall tournaments.

Tiger freshman Romy Farah is also listed among the top-100 singles players in the country. The native of Cali, Colombia, re-entered the rankings at 88 this week. Farah has a 16-9 overall record, including a 4-0 mark in league play and a 6-6 tally at flight two singles. She is 3-6 against nationally ranked opponents, including victories over players ranked #30, #72 and #81.

Coin and Farah are also listed among the nation’s best in doubles. The duo is listed 36th in this week’s ranking and has a 12-3 overall record. Coin is also ranked in the doubles poll with fellow senior Alix Lacelarie. Lacelarie and Coin are 6-1, with their only loss to Kentucky’s Coventry and Schwenk at the Riviera/ITA All-American Championships.