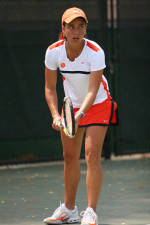 Women’s Tennis Set For Pair Of Home Matches This Weekend

CLEMSON, SC – The ninth-ranked Clemson women’s tennis team will play host to a pair of teams this weekend as the Tigers return to the Hoke Sloan Tennis Center. Clemson will take on the 47th-ranked Purdue Boilermakers (1-1) at 11:00 am on Saturday before playing host to #34 Virginia Commonwealth (6-0) on Sunday morning.

The Tigers are 2-0 after recording victories over Troy and Furman last week, each by a 6-1 margin. Clemson swept the doubles matches in both contests, while Estefania Balda, Ani Mijacika, Ina Hadziselimovic and Alexandra Luc all posted a pair of wins in singles play.

Clemson vs. Purdue Saturday’s match will be just the fourth in history between the Tigers and Purdue. All three prior meetings were held in Clemson, SC with the Tigers claiming the victory in each. The teams last met during the 1988 season when Clemson defeated the Boilermakers, 7-2.