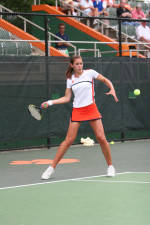 CLEMSON, SC – The Clemson women’s tennis team reentered the Fila/ITA Tennis top 25 this week at #23. The Tigers have won their last three matches, including an upset of then-ranked #9 Duke on Mar. 23, and now own an 8-9 overall record.

Sophomore Ani Mijacika held the #2 singles ranking for the second straight individual poll. The native of Makarska, Croatia boasts a 23-5 record for the year with 13 wins against ranked opponents. She earned the nation’s top ranking earlier this season and has been ranked in the top five in all six singles poll this spring.

Carol Salge and Estefania Balda were also listed in the singles poll at 85th and 109th, respectively. Salge, a senior from San Roque, Brazil, is riding a six-match winning streak to even her overall record to 10-10. Balda owns a 13-14 overall record and recently posted an upset of Duke’s 14th-ranked Ellah Nze.

After recording back-to-back upsets over two top-10 doubles team on Mar. 22-23, Mijacika and Salge moved up to #8 in the most recent doubles rankings. The Tiger tandem is now 9-2 and winners of its last five matches.

Mijacika was also listed 25th with Federica van Adrichem. The team went 7-3 during the fall season.

The Clemson team will return to action this weekend as the Tigers play host to Virginia Tech and Virginia at the Hoke Sloan Tennis Center.