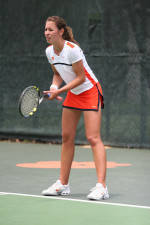 Mijacika reached the finals of the two most prestigious fall tournaments for an 11-2 record. The sophomore from Makarska, Croatia was ranked #1 in the southeast region, as of Dec. 7, with wins over seven players ranked in the top 70 during the fall. She is the reigning ACC Freshman-of-the-Year after posting a 25-7 record in 2006-07 and earned doubles All-America honors.

Head Coach Laurianne Henry to the mix. The 2007 team went 10-1 during the ACC season to claim a conference regular season co-championship and boasted a 22-5 overall record. The Tigers reached the round of 16 in the NCAA Tournament while posting seven wins over top-25 teams, second-most in school history.

Junior All-American Federica van Adrichem was ranked 53rd in the singles poll, while senior Carol Salge was listed at #83. Van Adrichem was 6-3 during the fall and recorded an impressive upset over then-ranked #18 player at the Duals In The Desert. The native of Amersfoort, The Netherlands compiled a 17-7 record last year.

Mijacika and Van Adrichem were then ranked 19th in the doubles poll. The duo made school history last season with its semifinals run in the NCAA Championships and #4 final ranking. The Tiger team was 7-3 during the 2007 fall season and advanced to the semifinals of the Riviera/ITA All-American Championships and the Wilson/ITA Southeast Regional Championships.

Clemson will open its spring schedule over the Jan. 18-20 weekend when the Tigers will play host to Auburn-Montgomery in an exhibition tournament. The regular season will kick off on Jan. 26 as Clemson will welcome Troy to the Hoke Sloan Tennis Center.