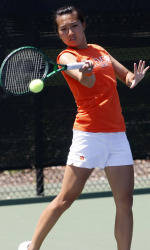 CLEMSON, SC – The Clemson women’s tennis team will take on No. 61 Florida State (5-5, 0-1 ACC) on Saturday morning at 9:30 am at the Hoke Sloan Tennis Center. The Tigers (8-5, 1-1 ACC), ranked 26th nationally, are coming off a dramatic 4-3 victory over No. 19 Georgia Tech in Atlanta on Wednesday afternoon. Live scoring for the match is available at ClemsonTigers.com.Clemson is  27-8 all-time against Florida State. The Tigers have won ten in a row in the series and are 12-3 all-time against the Noles in Clemson. This is Clemson’s first dual match at home since Jan. 29, as they’ve played eight in a row away from homeThe Tigers won their 65th match against a top-25 opponent in Head Coach Nancy Harris’ 15th season with the victory over the Yellow Jackets. Clemson dropped the doubles point despite a big upset at flight one, as No. 20 Josipa Bek and Keri Wong upended the nation’s 8th-ranked doubles team. Clemson then received singles wins at courts two through five to overcome a 3-1 deficit for the 4-3 win. Leading the charge was Wong, a senior from Jackson, MS. She leads Clemson with 17 singles wins this season and a 10-2 mark in dual match play. She has won each of her previous two matches against ranked opponents in three sets, and sits at No. 76 nationally with five wins against nationally ranked opponents. Klara Vyskocilova has also played will of late, with a 2-0 record in ACC play so far. She is ranked 90th in the nation, and has a 15-6 record. Nelly Ciolkowski, who also picked up a win over Georgia Tech is 15-7 this season and is in search of her 69th career victory. Freshman Beatrice Gumulya picked up her first career ACC win against Georgia Tech, and has found a spot in the middle of the lineup. After playing the Seminoles, the Tigers will be off until spring break when they’ll travel to a top-ten Baylor squad on Mar. 20. Clemson will play again at home on Mar. 30 and Apr. 1.