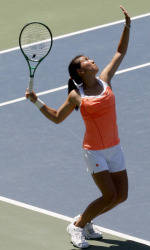 The Clemson women’s tennis team will open their 2011-12 season with the flighted Furman Fall Classic in Greenville, SC from Friday, Sept. 23 until Sunday, Sept. 25. The tournament features players from eight teams, including Clemson, and seven of whom finished in the top 35 nationally a season ago.

The event is flighted, meaning there is no team winner, but individuals can win championships in their flight by tournament format in singles and doubles. There are seven seeded singles flights and four seeded doubles draws.

Doubles play begins on Friday at 9:00 a.m. on Friday, followed by singes action at 1:00 p.m. Play continues on Saturday and Sunday, beginning at 9:00 am each day.

Clemson is familiar with many of the teams in the field, as the Tigers played duals with North Carolina, Vanderbilt, South Carolina, and Florida State in 2011.

The Tigers feature the nation’s top doubles team in Josipa Bek and Keri Wong, who reached the finals of the three grand slams a season ago. Bek is also ranked 8th nationally in singles, and Wong 32nd. Junior Nelly Ciolkowski is ranked 83rd nationally, and Klara Vyskocilova enters the season ranked 98th.

All four of those players started on Clemson’s Sweet 16 run last season. The Tigers also add Monika Kochanova, who sat out last season. She is ranked as the tenth best newcomer nationally by the ITA, and will play in the flight six singles draw.