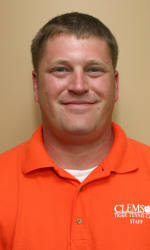 Head Coach Nancy Harris of the Clemson women’s tennis program has announced the addition of Darrell Jernigan as her assistant coach for the 2005-06 season. Jernigan comes to Clemson after serving as a biology and chemistry teacher as well as the men’s tennis coach at West Oak High School in Westminster, SC.

Jernigan is not unfamiliar with Tiger tennis, as he played an active role in reviving the Clemson Youth Tennis Program from 1998-2000, a program that serves area juniors players. He is also a Clemson alum, receiving his degree in biology in 2000. Jernigan graduated from Seneca High School in 1991, where he was a member of the varsity tennis team. He continued his tennis career as a scholarship player at North Greenville College from 1991-1993. He then walked onto Winthrop University’s team where he played until 1994.

Jernigan and his wife Frances have two children, Alexis (7) and Riley (4).