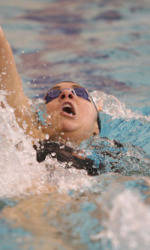 Head Coach Christopher Ip said, “”We were excited that we made the NCAAs and had some good swims and we were able to score.”

Parkhurst, Rachel Regone, Lauren Sindall, and Alexandra Allen all competed for the Tigers. On day one, the group touched in at 1:29.97 in the 200 free relay preliminaries, which would have been 12th. However, the Tigers were disqualified due to a false start, negating their time, even though it would have been the fastest in ACC history, breaking their own mark set last month at the ACC championships.

Parkhurst was busy, competing in the 200 free relay, 100 back, 200 back, and 200 free. Parkhurst just missed All-America honors in the 100 back, placing 17th. However, on the same day, Parkhurst was able to navigate her way into the consolation finals of the 200 free, placing 16th at 1:49.83 after swimming a 1:45.84 in the preliminaries, her second-fastest career time.

Ip added, “Rachel [Regone] went under 50-point for the first time. We were happy with the efforts. We took a step forward and we are moving in the right direction.”

A key aspect of this season’s NCAAs is that all of the Tiger competitors are juniors or sophomores, which will be valuable heading into next season.

Assistant Coach Lance Asti was pleased yet still hungry, adding “We were proud of our girls’ efforts. They showed a lot of perseverance. All of them are ready to get back in the water and get ready for Olympic trials and prepare for next year. We were hoping for a big step, but we got a baby step in the right direction.”

With all but three athletes returning on the women’s side in 2008-09, Ip summed it up, saying “All of our athletes are coming back and we are looking to set the bar higher next year.”

Full results for the 2008 NCAA Championships are availible at: http://www.ncaaswim.com/women08/?DB_OEM_ID=17300