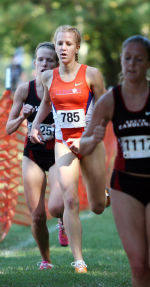 The Clemson women’s cross country team will travel to Louisville, KY to take part in Saturday’s NCAA Southeast Regionals. The 6K event will be held at the E.P. “Tom” Sawyer Park. The race is scheduled for 11:00 AM.

The meet will serve as the seventh event of the cross country season for the Lady Tiger team. Most recently, Clemson competed at the ACC Championships two weeks ago in Earlysville, VA. The Lady Tigers, one of the youngest squads in the region, will travel three freshmen and two sophomores among their top seven.

Laura Laughlin, a sophomore in academic standing but freshman in terms of eligibility, has lead the team in scoring at four of the six previous meets this season. She placed in the top 10 at the Gardner-Webb Duals and was 11th at the Furman Invitational on October 14. She was the team’s top finisher at the ACC Championships two weeks ago.

Patrice McMillan, a senior, has been one of the team’s most consistent performers this season. She has scored in every meet this year, including a career-best 10th-place showing at the Furman Invitational. Thea Dix is the only other upperclassmen on the trip this weekend. The junior from Ellenwood, GA has scored in three events this year.

Sunday Ford and Lisa Brown are a pair of sophomores making the trip this weekend for Clemson. A native of Piedmont, SC, Ford has been consistent this season as well. She has scored in every event, including a season-best finish of 13th at the opening Gamecock Invitational in September. Brown has contributed to the team score at two of the last three events for the Lady Tigers.

Maggie Bernard and Ashley Vaughn round out the travel squad for Clemson for regionals. Both contributed to the team’s scoring total at the ACC Championships two weeks ago. Both have competed in four of the six events so far this season.