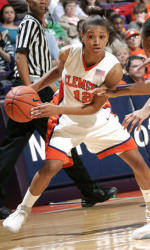 CLEMSON, SC – The Clemson women’s basketball team will travel to #1 Duke for a Monday night contest in Durham, NC. The Tigers (10-12, 2-5 ACC) and Blue Devils (23-0, 11-0 ACC) are slated for a 7:00 pm tip-off. The game will be broadcast by the Clemson Tiger Sports Network with Don Munson providing the play-by-play and Kanetra Queen serving as color commentator. Fans may also follow the action on the Internet via livestats by selecting the link below.

Junior Tasha Taylor has been the Lady Tigers’ leading scorer in ACC action this season with 14.5 points per conference game. Overall, she ranks second on the team with a 12.5 scoring average as D’Lesha Lloyd owns a team-best 14.7 figure. Lloyd also leads Clemson on the boards with a 7.0 rebounds per game average. Freshman Lele Hardy is also averaging in double figures with a 10.8 average that ranks second among ACC freshman. The Spartanburg, SC native also leads the league and ranks ninth in the nation with a 3.32 steals per game average.

Clemson vs. Duke, The Series Monday night’s contest will be the 61st meeting between the Lady Tigers and Blue Devils, dating back to the 1977-78 season. Clemson holds a 32-28 overall advantage in the series score, but Duke leads by a 16-9 margin in games played in Durham, NC. The Blue Devils have also won the last nine match-ups, including a 97-65 victory in Clemson, SC last season. The Lady Tigers last defeated Duke in the 2000-02 season, winning by a 93-75 margin on their home court.

Scouting the Blue Devils Duke enters Monday night’s contest as the #1 ranked team in both the AP and USA Today polls, boasting an unblemished 23-0 record. The Blue Devils most recently posted a 76-61 victory over Virginia in Charlottesville on Friday night.

Sophomore guard Abby Waner leads the Duke offense with a 14.7 scoring average and has hit 41 three-point field goals so far this season. Center Alison Bales leads the nation with a 4.8 blocks per game average, through Jan. 28 games and also posts 11.3 points and 7.7 rebounds per game. Point guard Lindsey Harding also averages double figures for Duke with a 14.5 figure, while tying for the team lead with 92 assists on the year.

As of Jan. 30, the Blue Devils led the country in field goal percentage defense, allowing their opponents to convert just 30.8% of their shots. They also ranked second in scoring defense, scoring margin and blocked shots.