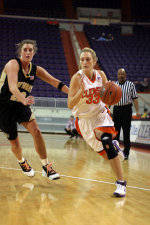 CLEMSON, SC – The Clemson women’s basketball team will conclude its 2006-07 regular season as the Lady Tigers (12-16, 4-9 ACC) will play host to Virginia (15-13, 4-9 ACC) on Sunday, Feb. 25. The teams are slated for a 2:00 pm tip-off from Littlejohn Coliseum. Fans will be able to follow the action three different ways. The Clemson Tigers Sports Network will broadcast the game over the airwaves with Don Munson providing the play-by-play and www.clemsontigers.com.

Clemson’s lone senior Carrie Whitehurst will play her final game at Littlejohn Coliseum. She is a veteran of 104 games over her four years in Tigertown and has drained 79 career three-point field goals. In the 2006-07 season, the Duluth, GA native is averaging 5.0 points and 3.2 rebounds per game. She leads the team with 29 three-pointers and boasts a .341 percentage from behind the arc.

Clemson vs. Virginia, The Series Sunday’s competition, the Lady Tigers’ final game of the 2006-07 regular season, will be the 60th meeting in history between Clemson and Virginia. The Cavaliers lead by a narrow 31-28 margin in a series that dates back to the 1977-78 season. However, the Lady Tigers hold a 14-11 advantage in games played on their home court, including the most recent match-up at Littlejohn Coliseum, winning 60-56 in 2004. Virginia claimed last season’s contest, 83-64, in Charlottesville, VA.

Scouting the Cavaliers Virginia enters its final regular season game with a 15-13 overall record and a 4-9 ledger in ACC play. Most recently, the Cavaliers fell at Georgia Tech, 73-49.

Lyndra Littles leads the squad in both scoring and rebounding wtih 16.4 points and 8.8 rebounds per game. The 6’1″ Littles has made a team-high 170 field goals while also converting 120-of-159 free throws. Monica Wright, one of the league’s top freshman, ranks second on the team with a 14.6 scoring average, which also leads all ACC rookies, and is pulling down 6.0 rebounds per game from her guard position.

Overall, Virginia is averaging 72.0 points per game with a 39.8 rebounding figure. The Cavs are shooting 42.0% from the field with a 72.1-percentage from the charity stripe.

Veterans vs. Virginia Junior D’Lesha Lloyd is averaging a team-best 8.0 points per game against Virginia, but classmate Tasha Taylor led the team in last season’s contest. Taylor tied for high scorer honors with 12 points and also handed out five assists in the game in Charlottesville, VA.