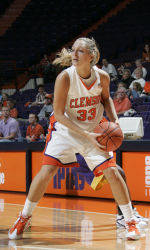 CLEMSON, SC – The Clemson women’s basketball team will open its 2006-07 season on Friday night at the Arkansas Lady Razorbacks. The game is scheduled for a 7:00 pm tip-off at Littlejohn Coliseum. Fans can follow the action via livestats, or they may watch the game over the Internet as part of the ACC Select video streaming package. Links to both are available on www.clemsontigers.com.

Junior Tasha Taylor is the lone returning starter from last year’s squad, as she earned the assignment in all 29 games. Taylor recorded a 5.59 assist per game average that ranked third in the ACC and 18th in the nation last season. Her classmates Adrianne Bradshaw and D’Lesha Lloyd also return for their third seasons at Clemson, while Carrie Whitehurst will begin her senior campaign on Friday night. Moreemi Davis will also be back on the court after red-shirting the 2005-06 season, and Susan Yenser will also be back for her sophomore year as a Lady Tiger.

Clemson vs. Arkansas Friday night’s contest between the Clemson and Arkansas women’s basketball teams will be just the second meeting in history between the two schools. The Lady Tigers faced the Lady Razorbacks in the first round of the Mideast Regional of the 2002 NCAA Tournament. Arkansas won that contest, 78-68, in Manhattan, KS to advance to the second round of the tournament.

Chrissy Floyd led Clemson with 30 points and Leah Roper added 11. Kanetra Queen, current Director of Women’s Basketball Operations, also scored in double figures against Arkansas with 10 points. She was a freshman that season.

Scouting Arkansas The Arkansas Lady Razorbacks return three starters from last year’s 13-15 team. Overall, they have seven letterwinners back from the 2005-06 season and have welcomed three newcomers to the squad. Arkansas went 5-9 during the Southeastern conference season for an eighth-place finish in the league.