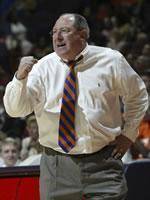 The Clemson women’s basketball team will play host to Berry College on Sunday in Littlejohn Coliseum. The game, which tips off at 2:00 PM, will be open to the public. Tickets for the game are $6 for adults, and $4 for high school ages and under.

The Lady Tigers were 17-12 last season, and two starters and six letterwinners return for Jim Davis’ squad this year. Julie Talley led the Lady Tigers in three-point shooting last season, and she returns as one starter. The other is former freshman All-ACC player Amanda White, now a junior. The Fountain Inn, SC native averaged 6.2 points and 4.9 rebounds per game last year.

Clemson’s first regular season game will also come on its home floor, as the Lady Tigers play host to Western Carolina on November 19 at 5:00 PM.