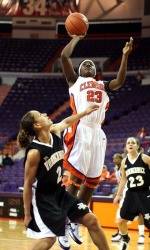 CLEMSON, SC – Senior forward D’Lesha Lloyd and Lady Tigers will travel to East Lansing, MI to face #19/20 Michigan State in the inaugural Big Ten/ACC Women’s Basketball Challenge on Thursday night. Clemson (4-3) and the Spartans (5-1) are slated for an 8:00 pm tip-off from the Jack Breslin Student Events Center. The game will be televised on the Big Ten Network with Dan Gutkowsky calling the play-by-play and Mary Murphy providing color commentary.

Fans can access the Big Ten Network on DirecTV channel 220. The action will also be broadcast on the airwaves in the Clemson area with Dan Scott on WCCP-FM (104.9). Livestats will be available as well on www.clemsontigers.com.

D’Lesha Lloyd is averaging 12.0 points and 7.5 rebounds, both team highs, since returning from a shoulder injury on Nov. 14. Point guard Christy Brown is also scoring in double figures with 10.0 points per game to go along with 15 assists on the year.

Clemson is coming off of a successful trip to Boulder, CO where the Lady Tigers won the Coors Classic title. Overall, they are averaging 12.9 steals per game to rank third in the ACC and are forcing 23.6 opponent turnovers per game.

Scouting The Spartans The Spartans have won three straight matches since falling to LSU in the Preseason NIT on Nov. 15 and will return to the Breslin Center for their first home game since Nov. 11. They boast a 5-1 record so far in the 2007-08 season with wins over IUPUI, Evansville, Northern Illinois, Kansas State and Delaware State.

Sophomore center Allyssaa DeHaun leads the squad in both scoring and rebounding with averages of 16.2 points and 7.5 boards per game. She is also shooting 58.5-percent from the field with 32 blocked shots already this year. Kalisha Keane is also averaging in double figures for Michigan State with 13.3 points per game, while senior Courtney Davidson has drained a team-best nine three-pointers.

Overall, the Spartans average 63.2 points per game while holding their opponents to just 53.2, and they own a .480 field goal percentage.