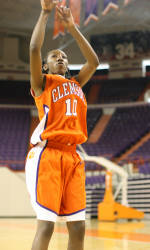 ATLANTA, GA – Lele Hardy recorded a double-double on Thursday night but the Clemson women’s basketball team suffered a 77-59 loss to Georgia Tech at the Alexander Memorial Coliseum in Atlanta, GA.

Hardy finished with 15 points and 10 rebounds to lead the Lady Tigers on the boards and rank second in scoring. The sophomore from Spartanburg, SC was 7-for-13 from the field with a pair of steals.

Chioma Nnamaka led Georgia Tech (17-4, 4-3 ACC) with 23 points, while Janie Mitchell added 22 and a team-best seven rebounds in the win.

Clemson (9-13, 2-5 ACC) matched its season high with 28 turnovers, which the Yellow Jackets converted into 25 points.

Although the Lady Tigers hit one more field goal in the game, Georgia Tech hit 27 free throws, compared to just eight by Clemson.

The Lady Tigers scored eight unanswered points in the final minutes of the first half to trail the Yellow Jackets by just five at 33-28. However, Nnamaka hit her fourth three-pointer of the night as time ran out to give Georgia Tech the eight-point advantage at the break.

Clemson scored the first basket of the second half, but the Yellow Jackets opened up the game with a 21-4 run in the first 10:37.

The margin hit 29 points at 66-37 on a pair of free throws by Georgia Tech’s Alex Montgomery with 6:38 remaining.

The Lady Tigers finally found success on the offense end, as 20 of their total points came in the final six and a half minutes, but the deficit was too much to overcome.

Clemson will return to Littlejohn Coliseum on Sunday afternoon to play host to the Wake Forest Demon Deacons. Tip is scheduled for 2:00 pm.