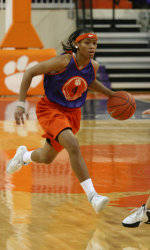 CLEMSON, SC – The Clemson women’s basketball team suffered a 75-69 loss to Arkansas in its season opener on Friday night at Littlejohn Coliseum.

Clemson senior Carrie Whitehust posted a career high while leading the Lady Tigers on the boards with 10 rebounds. Tasha Taylor also recorded a personal best with a 16-point performance on Friday night.

Rookies Lele Hardy and Morganne Campbell scored the first points of their Clemson careers as Hardy turned in six and Campbell converted a field goal to open the second half.

Danielle Allen led four double-figure scorers for Arkansas with 14, while Sarah Pfeifer and Lauren Ervin each contributed 13 in the effort. Donica Cosby added 12 for the Lady Razorbacks.

In a foul-plagued first half, the Lady Tigers and Lady Razorbacks entered the break knotted at 32. Arkansas scored seven of the first nine points, but Clemson went on an 8-0 run to go ahead 10-7 at the 16:16 mark. The Lady Razorbacks evened the score at 17 apiece with just under 13 minutes remaining, and the teams were tied again at 22-22. Clemson then held Arkansas without a field goal for nearly five minutes to take a 30-24 advantage. The lead increased to as many as six points on a free throw by Taylor before the Allen drained two jumpers and the Lady Razorbacks posted six straight points to close the gap and end the half.

Arkansas scored the first field goal of the second period as the score remained tight throughout the first five minutes. The Lady Razorbacks scored six unanswered points to take a 48-41 lead in the game before Brown ended the drought with a lay-up at the 12:32 mark. Clemson then cut the lead to one point at 48-47 on a Hardy jumper with 11:20 remaining, but Arkansas responded with a 9-0 run to take its largest lead of the game at 57-47 and remained on top for the rest of the game.

The Lady Tigers rallied to cut the deficit to two points on a baseline jumper by Taylor at the 4:25 mark and were within two points again at 66-64 after a Moreemi Davis lay-up with 1:50 remaining. Arkansas held on in the final minutes, however, and claimed their first victory of the season.

Clemson will be back in action on Monday night at Littlejohn Coliseum as the Lady Tigers will play host to the College of Charleston. The teams are scheduled to begin play at 7:00 pm.