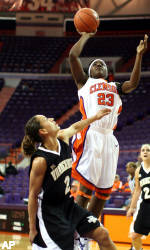 CLEMSON, S.C. – D’Lesha Lloyd posted 17 points in just her second game of the season, but the Lady Tigers were unable to overcome a bigger and more experienced Vanderbilt team and fell to the 19th-ranked Commodores, 74-56, on Tuesday night at Littlejohn Coliseum.

Lloyd was 7-for-16 on the night with four rebounds and four steals in just 26 minutes of play. Freshman Sthefany Thomas also hit double figures for Clemson, posting 10 to go along with five rebounds, four steals and a team-best four assists.

“D’Lesha came off the bench to have a big game for us,” said Lady Tiger Head Coach Cristy McKinney. “She was a true leader tonight and was who we went to when we needed a basket.”

Morganne Campbell led Clemson (2-3) on the boards with nine rebounds.

The teams hit the break knotted at 32-32. The Commodores hit the first shot of the night and increased their lead to 10 points (20-10) on a jumper by Jessica Mooney with 9:58 remaining in the half.

However, the Lady Tigers held Vanderbilt to just four points in the next 5:40 while scoring 20 of their own for a six-point advantage. Clemson then hit a drought, scoring just a pair of free throws by Lloyd in the final 4:18. The Commodores’ Christina Wirth drained two of her own with 23 seconds remaining to tie the score.

The 6-foot-4 Sherwood helped the Commodores to outscore the Lady Tigers, 24-8, to open the second half with 11 points in the stretch. Clemson could not capitalize on the offense end and never recovered from the run. Campbell cut the deficit to 10 at 56-46 after knocking down two foul shots, but Vanderbilt widen the margin to its largest of the night, 70-49, on a Sherwood free throw and won by the 18-point spread.

The Lady Tigers will head to Boulder, CO on Wednesday for the Coors Classic over the Thanksgiving weekend. Clemson will take on Rice in Friday’s day one action and will then face either Siena or the host Buffalos on Saturday.