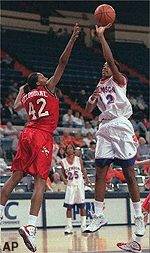 COLLEGE PARK, MD-Freshman Chrissy Floyd came off the bench and scored 17 points in leading Clemson to a 59-57 win over Maryland in an Atlantic Coast Conference women’s basketball game at College Park, MD late Sunday night. Clemson has won four games in a row, six of the last eight.

Floyd was joined in double figures by the Lady Tigers’ Nuria Forns and Erin Batth as both players scored 10 points each.

Maryland was led in scoring by Deedee Warley with 19 points. Marche Strickland added 15 for the Terrapins.

Clemson improves to 15-7 overall, 6-4 in the ACC. Maryland falls to 13-9 overall, 4-7 in league play. The Lady Tigers have won six of the last seven games in the series between the two schools.

In the first half, Maryland took a 17-10 lead with 9:13 left to go behind Deedee Warley’s six points in this rally. The Lady Tigers started slow as Clemson hit six free throws in the first 5:52 and scored its first field goal with 7:23 expired in the first half.

Clemson went on a 10-0 run and took a 20-17 advantange with 4:10 remaining as Chrissy Floyd both scored four scored each in this Lady Tiger rally.

“We feel extremely fortunate to have this win at College Park, MD,” said Clemson Head Coach Jim Davis. “Maryland has a quality program. Our kids did a great job fighting though the screens, defending, and being aggressive. Freshman Chrissy Floyd came up with huge baskets. She must have ice water in her vains. She is a really smooth player.”