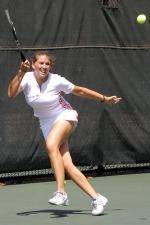 MADISON, Wis. – The University of Wisconsin will welcome some of the country’s top women’s tennis talent as it plays host to the 2005 USTA/ITA Women’s National Team Indoor Championship (WNTIC) Feb. 3-6 at the A.C. Nielsen Tennis Stadium.

Last year at the WNTIC, Wisconsin fell 7-0 to No. 6 Vanderbilt in the first round before losing to No. 10 North Carolina 5-2 in the first consolation bracket. In their final match of the tournament, the Badgers dropped a 4-2 decision to No. 23 Tennessee.

Wisconsin and the Nielsen Tennis Stadium have been the tournament’s only host since its inception in 1988.

First-round action begins Thursday, Feb. 3, with second round-play and the first consolation bracket to follow on Friday, Feb. 4. Tournament semifinals, along with the championship quarterfinals and second- bracket consolation matches, will be played Saturday, Feb. 5.

The championship match is slated for Sunday, Feb. 6. Match times and draws have yet to be determined.

For more information on the WNTIC, visit the ITA’s Web site at www.itatennis.com and continue to check uwbadgers.com for updates.