Will Swinney – Always on Hold

Will Swinney is no stranger to Clemson football. Being son to Head Coach Dabo Swinney has also meant being a part of the Clemson Family and seeing the evolution of the Tiger program over the last two decades. However, #22, like many others in the college football community, is not accustomed to the term “super senior.”

Graduating from nearby D.W. Daniel High School, Swinney experienced first hand the effort and dedication that it took to be a part of his father’s program very early on. Earning a spot as a walk-on, Swinney originally planned to redshirt his freshman season to work on his development as a player.

“I saw the holder job was open,” explained Swinney. “And I thought it’d be a great opportunity for me to earn that spot and get on the bus and make a name for myself that way. It was good and I am glad I did that.”

Since his decision to play as a holder, Swinney has prided himself on putting in the necessary work to become a consistent and dependable player for the team. He has not only perfected his craft of placing the ball on each extra point and field goal, he also regularly stays after practice to get extra reps at the wide receiver position.

Swinney’s driven mentality and extra training ultimatey pushed him to receive a scholarship. Right after a team lake day in 2018, the then walk-on was awarded a scholarship, which was given to only four other walk-ons that year.

While the head coach was initially hesitant to award a scholarship to his own son, Swinney’s teammates and assistant coaches were adamant that he had earned the honor.

The Clemson graduate has now earned his newest achievement, which is a title that is foreign to many…“super senior.” Due to the uncertainties and challenges that came along with playing the football season during a global pandemic, the NCAA granted each 2020 player another year of eligibility. With many seniors now getting to play a fifth season of college football, these players have been added to a never-before-seen class of “super seniors.”

This offer was not known by players upon conclusion of the 2019 season, and he was grateful for the opportunity to take advantage of an extra year.

“I remember going into the last year and it was like three years ago I had just gotten here…how can I already be done? Something about it felt off and I did not feel right. So whenever that opportunity came about, I was extremely excited.

“Now I feel like I get the best of both worlds. I got to play as a freshman and got a good taste of it and what that was like, but I’m also getting the benefit of what many others do. I’ve had five years to develop and fully get the most out of my potential.

“So honestly, it was a great opportunity. I got the best of both worlds.”

When explaining his decision to come back for one more season, Swinney continually recalled this “off” feeling. Ending his college career did not feel like the right time for him personally, but he also believed the team had unfinished business after the disappointing conclusion of the 2020 season.

After missing out on full stadiums and many gameday traditions, such as Tiger Walk, Swinney is anxious to get back to experiencing traditional gamedays that were sorely missed by both fans and student-athletes alike. Most importantly, Swinney and his teammates have their eyes on the prize.

When asked what he hopes to accomplish in his final year, a prideful yet shy grin crept across his face. A simplistic “we want to win another national title, obviously” was his swift response. The Clemson native made sure to emphasize that the whole team has the same goal in the front of each of their minds.

The finale to the perfect 15-0 season, the 2018 national title, is his favorite memory, and Swinney hopes to relive that experience one more time. As for his personal goals this season, he is focused on bringing his leadership to the team in a unique way.

“There’s still more for me to do, and I want to show it and make plays this year and help the team.”

Leadership is a quality that the veteran hopes to develop, not only for the team, but also for his time after Clemson. While Swinney is not entirely certain of his future plans, he currently wrestles with the idea of going into business or following in his father’s footsteps and pursuing a career in coaching.

In the meantime, Swinney is locked in on bringing a light to the locker room, living a legacy and making his teammates, coaches and family proud of his one last ride as a Tiger. 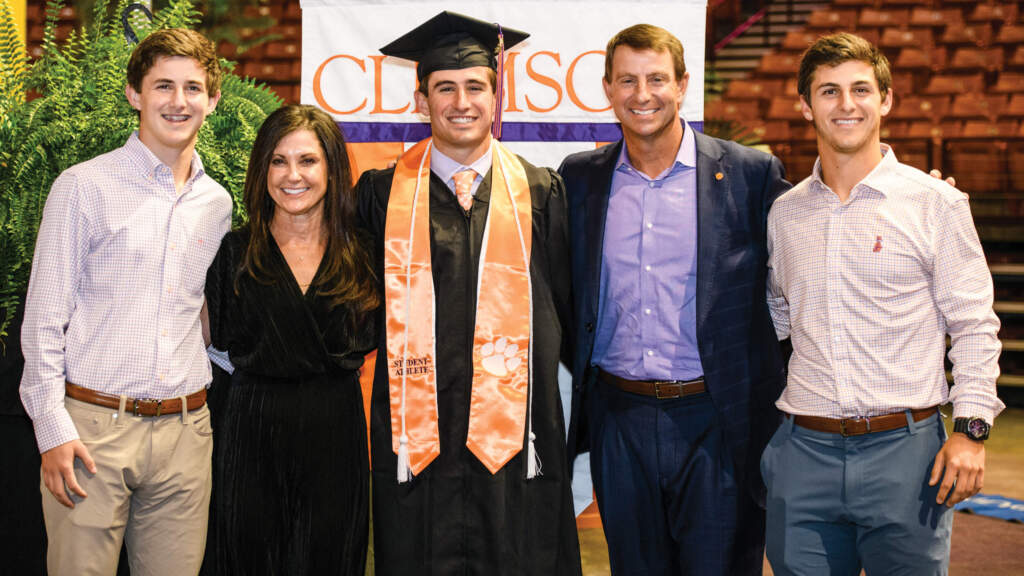