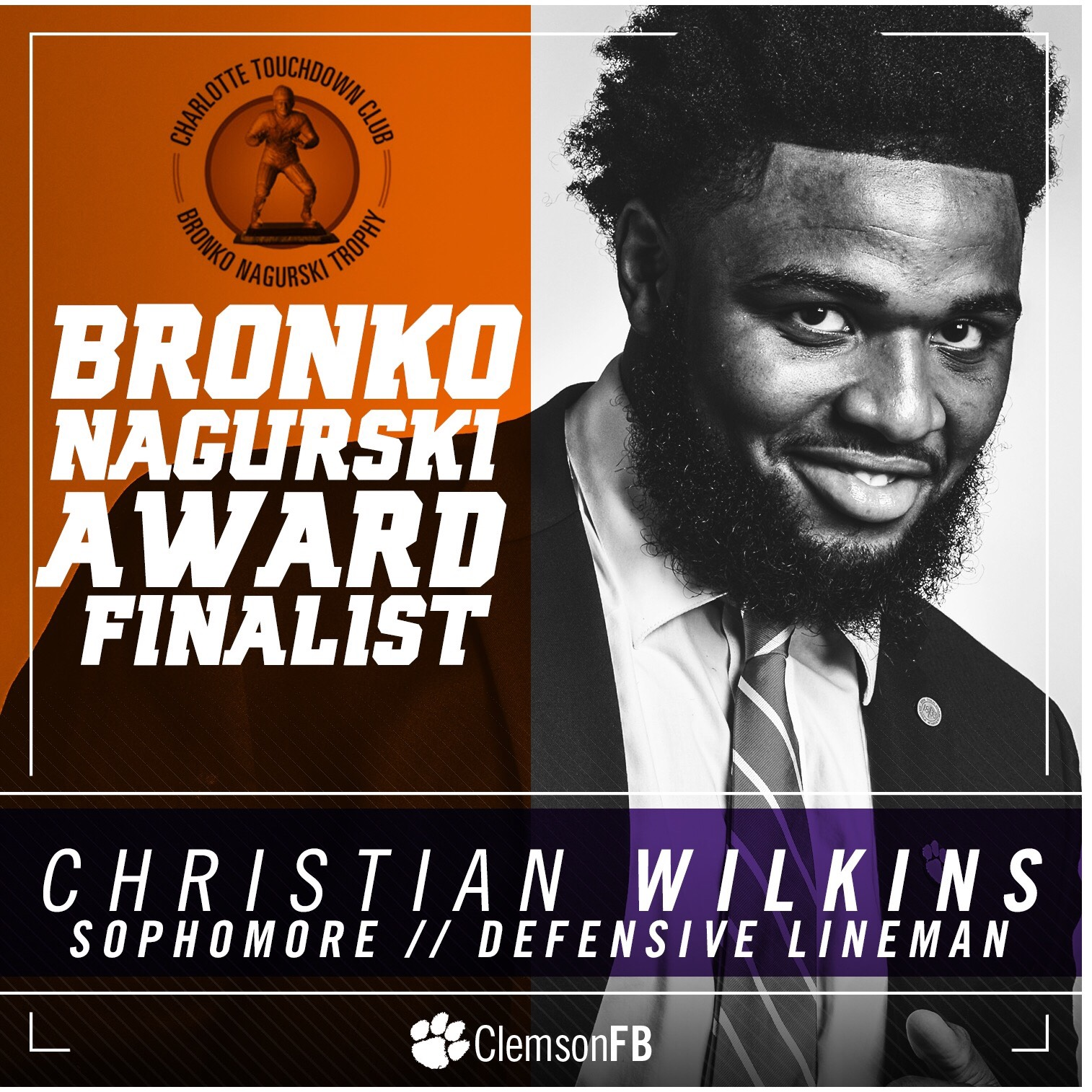 Clemson, S.C.—Clemson sophomore defensive lineman Christian Wilkins has been named one of five finalists for the 2016 Bronko Nagurski Trophy. The Award is presented each year to the nation’s top defensive playe by the Charlotte Touchdown Club in conjunction with the Football Writers Association.

The native of Springfield, Mass. has also been a contributor on special teams and offense. He caught a one yard touchdown pass against Troy, and had a 10-yard run on a fake field goal in a win over NC State. He is also a part of Clemson’s short-yardage “Jumbo Package” on offense.

The keynote address for the banquet will be given by Duke University Head Football Coach, David Cutcliffe. United States Naval Academy legend from the Class of 1975, Chet Moeller, will receive this year’s Bronko Nagurski Legends Award presented by Florida East Coast Railway and the inaugural Defender of the Nation Award presented by The Independence Fund will go to West Point’s Andrew King.

“The 2016 Bronko Nagurski Trophy finalists represent the very best college football has to offer,” commented John Rocco, Executive Director of the Charlotte Touchdown Club. “Each of these young men has distinguished himself as a player and as a leader and one of them will be recognized as one of the all-time greats of college football at this year’s Bronko Nagurski Trophy Awards Banquet.”

“ACN is proud to be the Presenting Sponsor for the Bronko Nagurski Awards Banquet and of our association with the Charlotte Touchdown Club and its mission of promoting Citizenship, Scholarship, Sportsmanship and Leadership,” said ACN President and Co-Founder Greg Provenzano. “Like the 2016 Bronko Nagurski Trophy finalists, ACN employees embody the qualities of hard work, determination and dedication to excellence.”

CBS Sports Network host Adam Zucker will serve as Master of Ceremonies for this year’s Bronko Nagurski Trophy Award Banquet and a CBS Sports Network broadcast of the event is scheduled for primetime Thursday, December 8th at 7:00pm EST.