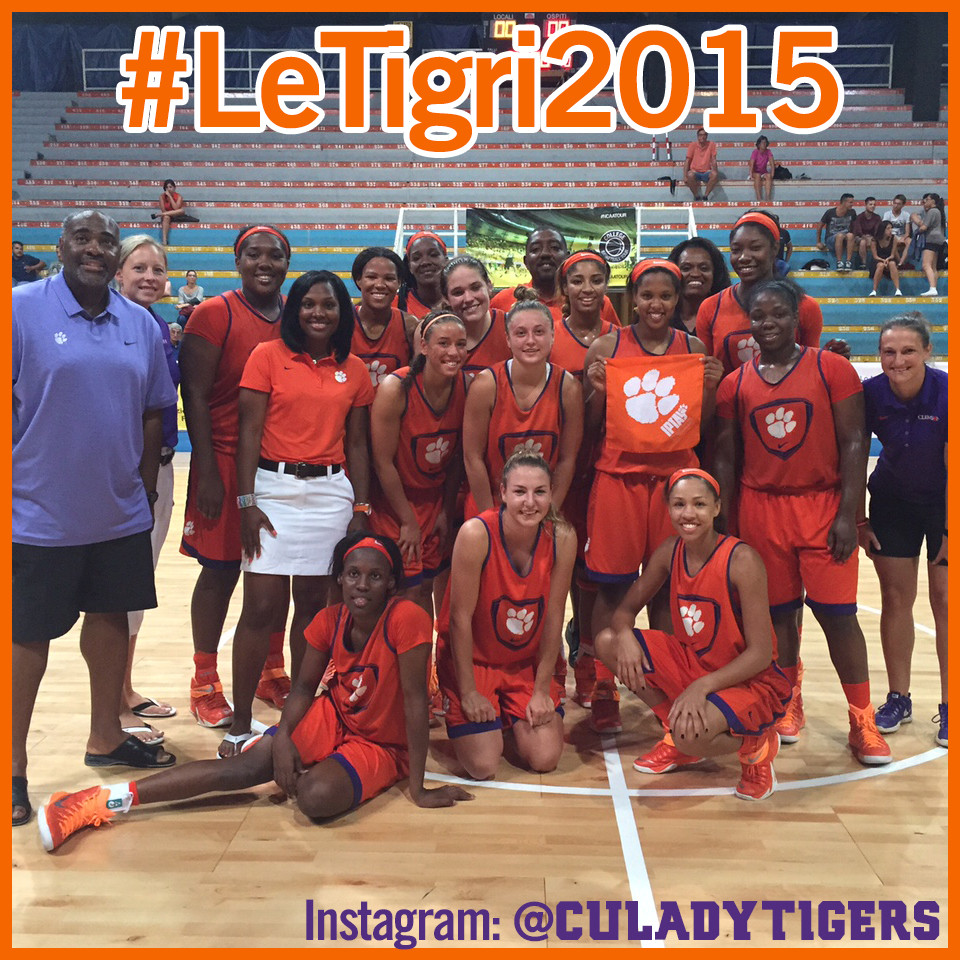 Our second day in San Marino was the sixth day of our Italy adventure. It’s unbelievable how fast the time has passed! We had a leisurely morning with some time to sleep in before heading out for a walking tour of the area, and then about four hours of free time on our own in the city.

San Marino has A LOT of hills. In fact, there really aren’t any flat areas in the city at all. Everywhere you go, you’re either walking uphill or downhill. A few of our staff members are pretty addicted to their Fitbits, and by 4 p.m. when we were done in San Marino, two staff members had registered 48 and 51 flights of stairs!

While the staff spent most of their free time venturing around the historic sites, shops and restaurants, many of the players took advantage of the time to rest their legs before our third and final game, which was in Pesaro, Italy against the Adriatic Sea Sirens.

FINAL: Clemson 85, Adriatic Sea Sirens 40 The extra rest the players enjoyed during the day was evident, as the team started the game on a hot shooting streak. By the end of the first half, the team had a 54-16 lead over the Sea Sirens, on a 23-for-38 field goal shooting performance. The Tigers continued to roll in the second half, and ultimately won the game by a score of 85-40. The defense was nearly as good as the offense, as the team came up with a total of 26 steals for the game.

For the second consecutive game, four players scored in double figures, this time led by freshman Keniece Purvis with 13. Freshman Aliyah Collier added 12, while sophomore Cha’nelle Perry had 11 and freshman Danielle Edwards scored 10. Collier tallied an impressive nine steals in the game, and, with her scrappy defense, was just one steal away from a double-double for the game.

The win was a great way to conclude the basketball portion of our Italy adventure, as we went 3-0 in our three games and more importantly, gained valuable experience and playing time for a young team. The atmosphere on the bus was pretty jovial on the way back to San Marino, which resulted in a round of karaoke on the bus.

Nearly everyone on the team and staff took his or her turn at the microphone at the front of the bus signing a song of their choice, prompted by Assistant Coach and DJ Extraordinaire Marc Wilson. Some of the crowd favorites were Francesca Tagliapietra’s rendition of Sia’s “Chandelier” and Director of Ops Kathy Becker’s “Ice Ice Baby.” Assistant Coach Daryl Oliver sang the Itsy Bitsy Spider, but we’re going to forgive him for his song choice, since he and his wife have four children under the age of 5, we doubt he has time to listen to anything other than kids songs. Karaoke was a fun way to end a great day and a great game, and certainly made the hour-long bus ride back to San Marino pass by quickly!