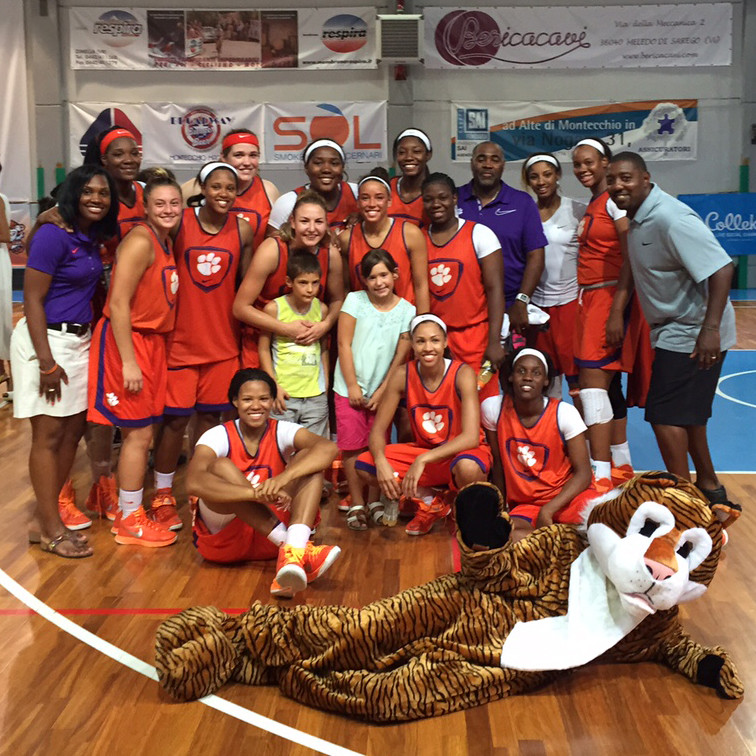 The fourth day of our Italy trip was a busy one. It started with an early breakfast at the hotel, and then a bus trip to Venice. Because the main part of the city is an island (we actually learned that Venice is made up of 118 different islands) the bus could only take us so far before we had to board a boat to transport us the rest of the way.

Before we boarded the boat, we met up with five more members of our group, who had just flown in that morning. Two players, freshmen Aliyah Collier and Sirah Diarra, our graduate assistant coach, Stojanna Hollis, and Andrea and Jeanell, the wives of assistant coaches Daryl Oliver and Marc Wilson, left Clemson on Friday, Aug. 7 and joined us in Italy Saturday morning.

Because everyone who visits the city has to enter and exit Venice by boat, riding across the water was actually kind of similar to driving down a crowded street, except significantly more chaotic as there are no lanes, street signs or traffic signals! Upon our arrival, we walked right to St. Mark’s Square and got in line to tour St. Mark’s Basilica.

The interior of St. Mark’s is known for its ceiling, which is adorned with beautiful artwork, made of 85 million small pieces of glass and gold leaf. It was a breathtaking sight, but unfortunately, we can only describe it to you, because photos were not allowed inside the church. When we finished the tour, we had time to sightsee and shop on our own in Venice. Many of us walked to the famous Rialto Bridge, watched the gondolas row through the Grand Canal and shopped for Murano glass, for which Venice is well-known.

When it was time to board the boat to go back to the bus, our tour guide had a surprise in store. Instead of boarding the large boat we took to the island, we separated into three smaller boats that took us down the Grand Canal, right through the middle of Venice and under the Rialto Bridge. If our earlier boat trip resembled driving down a crowded street, this was more like driving in rush hour traffic leaving Atlanta on a Friday afternoon!

On the way back to the hotel, we stopped for our pregame meal before going back to rest for a short time before it was time to head to the second game of our tour.

Four players scored in double figures for the Tigers: Cha’nelle Perry (17), Ivy Atkism (16), MaKayla Johnson (12) and Danielle Edwards (10). Johnson recorded a double-double in the second half alone, as 11 of her 12 points and 11 of her 14 rebounds for the game came in the second half. After a seven-steal performance in Thursday night’s game, Edwards added six more in Saturday’s contest.

Despite playing on very little sleep following their overnight flight to Italy, Diarra added 6 points and Collier added three steals to the Tiger cause.

Once again, Francesca Taliapietra’s fan club was out in force, and Franny scored seven points and added five rebounds, much to the delight of her friends and family. In addition, because our opponent was a local team, there were four players on the Montecchio Maggiore team that Franny actually played with or against while she was growing up. After the game, our College Basketball Tour hosts made a special presentation to the game’s MVP (Nelly Perry) and gave gifts to all of the players and staff on our team.

By the time we got back to the hotel, it was bedtime again, as Sunday we’re making the trip to our next city, San Marino.