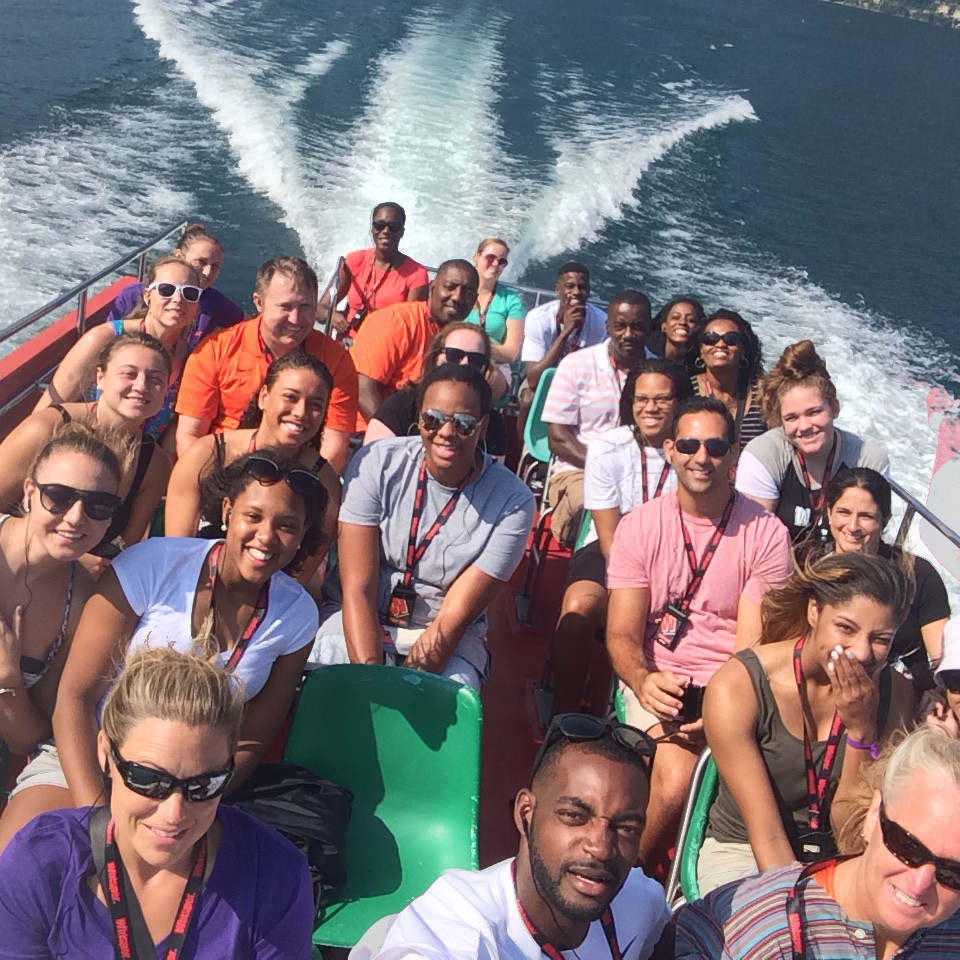 Our second day in Italy started out with breakfast in the hotel, where everyone was relaxed and ready to go after the first good night of sleep in a few days. After breakfast, we walked right across the street from our hotel and boarded our own private boat for a tour of Lake Como.

From the water, we saw many of the quaint villages that bordered the lake, as well as several ritzy hotels and fancy villas, including the one owned by George Clooney and the one where John Legend and Chrissy Teigen were married.

The boat docked at Bellagio, the most popular village on Lake Como, due to its prime location in the middle of the three branches of the lake and also it’s unique shopping and food establishments. While we were in Bellagio, we ran into the Creighton men’s basketball team, who is the same tour of Italy that we are. We met Len Gordy, Creighton’s Diversity & Inclusion Officer, who was an assistant men’s coach at Clemson under Cliff Ellis from 1985-92. During his time at Clemson, one of the great players Gordy coached was Sharone Wright, and he was thrilled to have the chance to meet Sharone’s daughter, Justice Wright, who is a sophomore on our team. Small world!

After an hour of touring Bellagio on foot, it was time to head back to the hotel, eat our pregame meal and head to the game, our first of three in Italy.

The team had a tough battle on its hands against a sharp-shooting team from Lithuania, but ultimately, the Tigers’ took over the game with defense and physicality. While the Lithuanian’s put together a good comeback effort in the final quarter, Clemson came out the winner, 63-60.

Freshman Danielle Edwards led the team with 22 points. At least 10 of her 22 points came off of turnovers, as she tallied seven steals for the game, five of which directly led to lay-ups. Perhaps’ Edwards most crucial steal came with less than 30 seconds left in the game. The Tigers had a 61-60 lead, but the Lithuanian team had the ball with a chance to score for the win. Edwards intercepted a pass for her seventh steal of the game, and was able to find junior Paige Mosley with a long pass breaking to the basket. Mosley easily laid the ball into the net sealing the Clemson victory.

Sophomore Cha’nelle Perry was second on the team with 15 points, while junior Paige Mosley, the team’s only upperclassman, posted a double-double, with 10 points and 11 rebounds. Sophomores Ivy Atkism and MaKayla Johnson added five points apiece.

One of the best parts of the day actually occurred before the game started. Francesca Tagliapietra, a sophomore from Carre, Italy, was not expecting her family to make the three-hour trip to the game. But just before the national anthems were played, in walked her mom, Lia, her sister, Serena, and two of her friends, Sofia and Edoardo, complete with homemade “Go Franny” signs! Franny was shocked to see them, and it was a very touching moment. We’ll have more details about Franny’s family and her hometown tomorrow, as our entire group is having dinner at her house tomorrow night.

After the game, the team and staff ate a postgame meal of pizza at the gym, before heading back to the hotel for the final night in Lake Como. On Friday morning, we’ll board the bus for the three-hour ride to Vicenza.