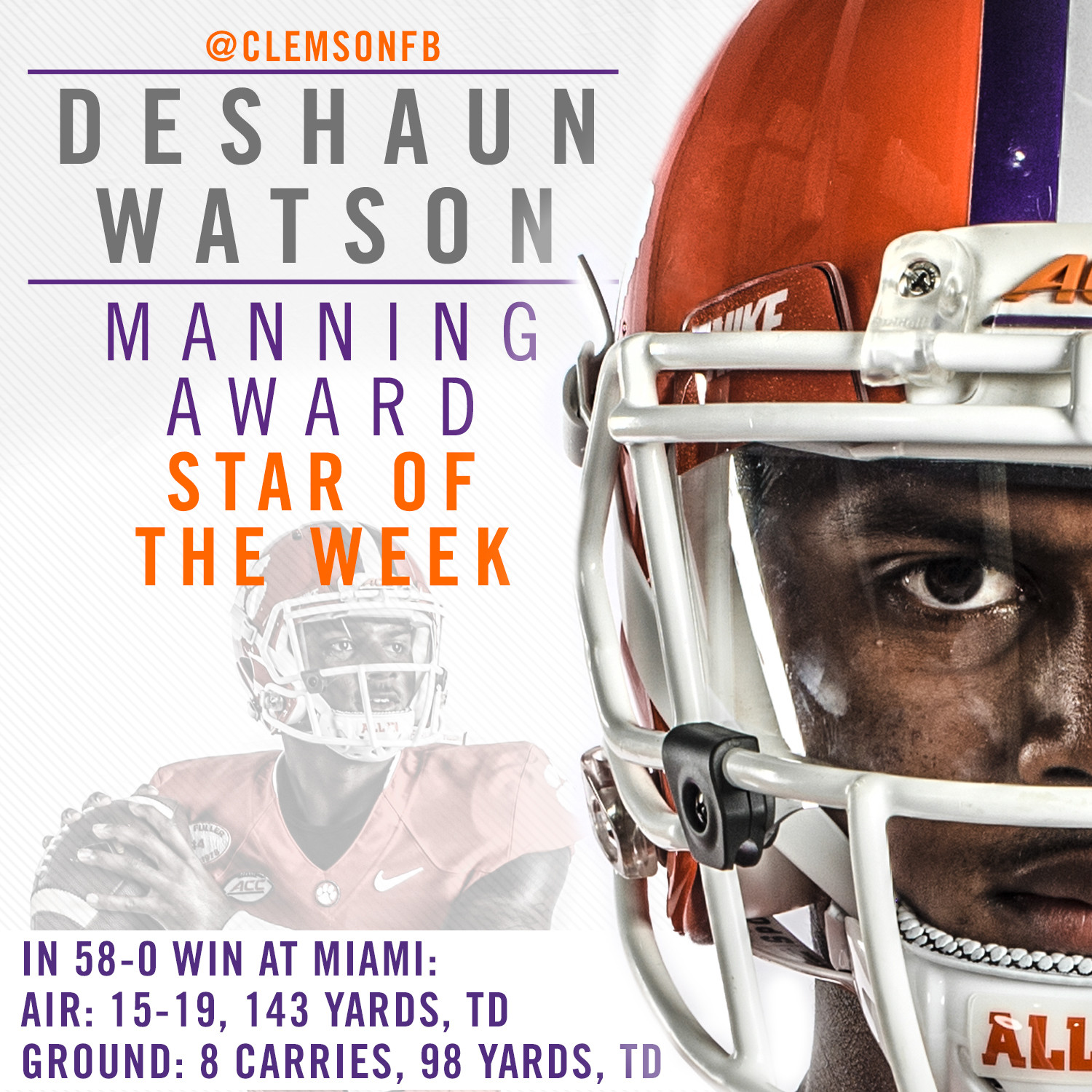 Watson One of Eight Manning Stars of the Week

NEW ORLEANS – Clemson quarterback Deshaun Watson is one of eight Manning Award Stars of the Week for games ending on October 24.   Watson led Clemson to a 58-0 win at Miami (FL) on Saturday.   The Manning Award is sponsored by the Allstate Sugar Bowl and selects eight top quarterbacks from around the country each week in recognition for their play the previous week.

College fans can go to the Allstate Sugar Bowl Facebook Page and vote for Watson as the top quarterback of the week.  Voting closes at 11 p.m. Central time on Thursday.

Barrett, who makes his first start of the season, also rushes for 101 yards and a pair of touchdowns, as the Buckeyes roll to a 49-7 Big Ten road victory over Rutgers.

Falk sets a record for the most passing yards ever against Arizona as he registers the sixth 400-yard game of his career in a 45-42 Pac-12 road victory over Arizona.

Johnson adds a rushing touchdown while registering his third straight game with five TD passes as the Falcons pile up 602 yards of offense in a 48-0 win over Kent State, which had been leading the MAC in total defense.

Lynch, who also rushes for a touchdown, tallies his career-high for passing yards while registering his sixth straight 300-yard game as he leads the Tigers to their 14th straight victory, a 66-42 American Athletic win over Tulsa.

Prescott adds a season-best 117 rushing yards and three more touchdowns to his season-high in passing yards as the Bulldogs upend Kentucky 42-16 in SEC action.

Rosen sets a school record for completions as he helps the Bruins snap a two-game losing streak with a 40-24 Pac-12 victory over No. 20 California.

Sirk, who also rushes for 109 yards, followed his fourth touchdown pass of the day by running for the game-winning two-point conversion in the fourth overtime of a 45-43 road victory over Virginia Tech; it was the first four-overtime game in ACC history.

Watson, who becomes the first Clemson quarterback to win 11 of his first 12 starts, adds 98 rushing yards and a touchdown while sitting much of the second half as the Tigers hand Miami its worst loss in program history, 58-0, in ACC road action.