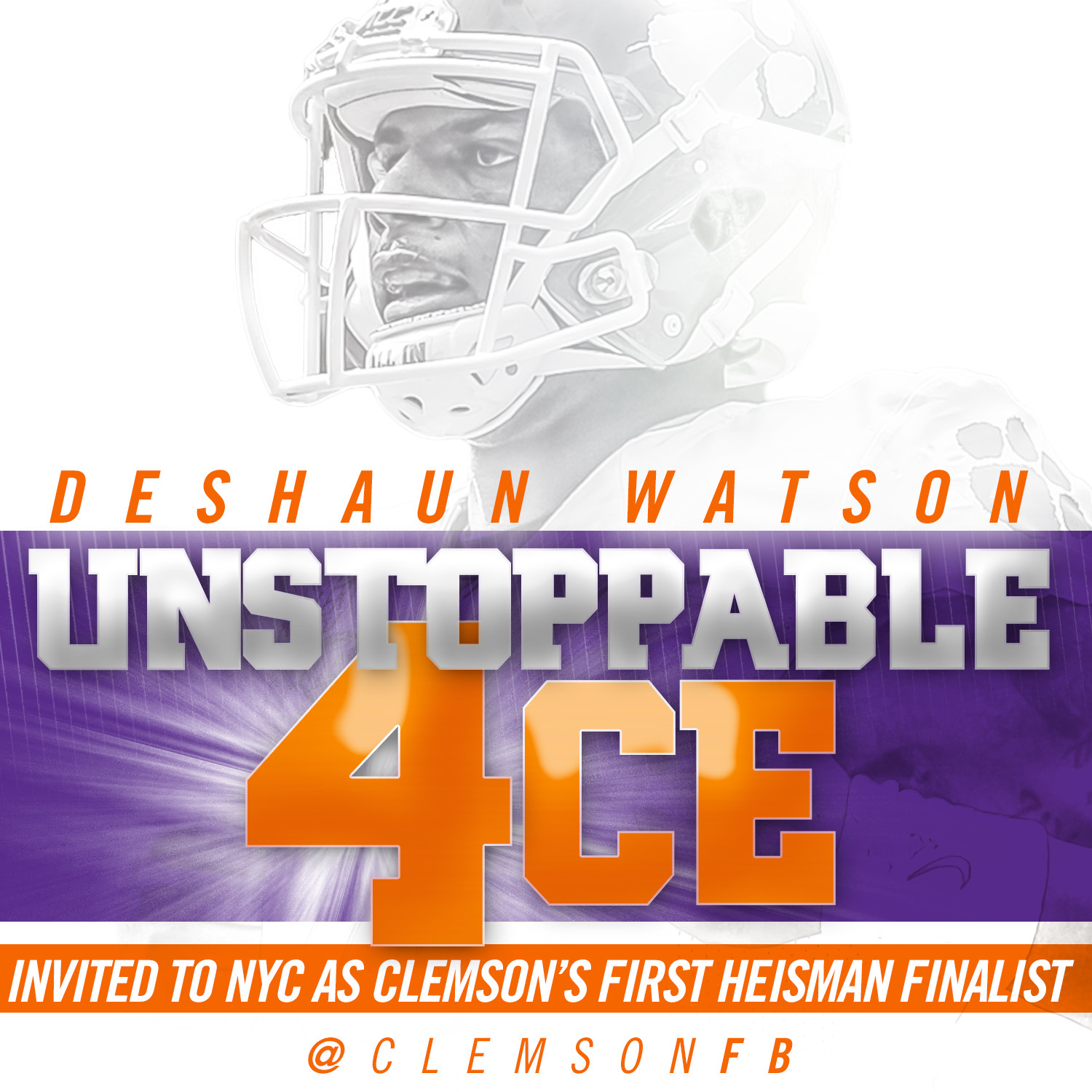 CLEMSON, S.C. — Clemson sophomore quarterback Deshaun  Watson has been named one of three finalists for the 2015 Heisman Trophy. The announcement was made on Monday evening.  Watson will be joined Saturday night’s ceremony in New York by Derrick Henry of Alabama and Christian McCaffrey of Stanford.

The Heisman Trophy recipient will be announced from the PlayStation Theatre in New York City on ESPN on Saturday during a program that will begin at 8 p.m.

Watson is Clemson’s first Heisman Finalist. Steve Fuller finished sixth in the 1978 voting and C.J. Spiller was sixth in the 2009 voting, but neither received an invitation to New York. Those are the only Clemson players to finish in the top 10 of the Heisman voting since the award began in 1935.

Watson has accounted for 41 touchdowns rushing and passing, fifth best in the nation and he ranks ninth in total offense per game and 11th in passing efficiency. He has gained at least 380 yards in each of his last six games and has guided the Clemson offense to a record nine  straight games with at least 500 yards total offense.

Watson is a big reason Clemson has won 16 consecutive games, a school record, and has already established a season mark for victories (13), and ACC wins (nine). Clemson won the ACC Championship last Saturday with a 45-37 win over No. 8 North Carolina. Watson threw for 279 yards and rushed for a career high 131 in the victory.

Deshaun Watson on being named a Heisman Finalist

“This means a lot because I have come a long way from last year.  A year ago on December 12, I was recovering from surgery.  I remember watching a story about Adrian Peterson and how he suffered a torn ACL (December 2011)  but came back to become the MVP of the NFL that next year.  That inspired me to work hard on my rehab.

“It has been a dream of mine to  bring my mom to New York and be a Heisman finalist.  We have never been to New York.

“ I am honored to be the first Heisman finalist  from Clemson..  I plan to represent our team and Clemson University and the Clemson family this weekend.

“This could not have been done without my teammates and our coaches.   This is a team award as much as anything.  Being undefeated and No. 1 ranked has everything to do with this.

“I want to give congratulations to the other finalists and I look forward to seeing them this weekend.”

Dabo Swinney on Deshaun Watson being named  a Heisman finalist

“I am so happy for Deshaun Watson.  This is recognition for a great performance on the field and for the hard work he has put in over the last year after suffering a torn ACL.   A year ago  Saturday night he was in the hospital having surgery.   Exactly a year later he will be in New York as a Heisman finalist.

“I am so proud of him and the way he has led our team, but it is also a tribute to our offensive line, our running backs, our receivers and the entire team.

“Deshaun Watson is the epitome of what the Heisman Trophy is all about.  He has been the leader of the only undefeated team in college football in every way.”