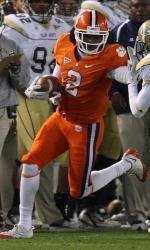 The Paul Hornung Award, presented by Texas Roadhouse, is awarded annually to the most versatile player in major college football. Fans now can vote online at www.votepaulhornung.com to help select finalists for the 2011 award.

Gilmore, Woods and Watkins are among 58 players eligible for fan voting on the Facebook page powered by Texas Roadhouse and the Louisville Sports Commission. Gilmore was directly responsible for stopping two Tennessee scoring opportunities in the Gamecocks’ win over the Volunteers, allowing South Carolina to keep pace with Georgia in the SEC East. Woods was a major player in USC’s triple overtime thriller against Stanford, including scoring a touchdown in the first overtime. Watkins, one of the nation’s hottest young players, had another huge game, surpassing the 100-yard mark in receiving and kick returns in an ACC battle against Georgia Tech.

Woods made the Paul Hornung Weekly Honor Roll for the second consecutive week while Watkins made his second appearance in three weeks. Gilmore made his first Honor Roll appearance of the season.

Week Nine Selections to the Paul Hornung Award Weekly Honor Roll  South Carolina’s Stephon Gilmore was the ultimate defender in the Gamecocks’ 14-3 win over Tennessee on Oct. 29. Gilmore blocked a 47-yard field goal attempts and recorded an interception in the endzone. He also had two tackles and a pass breakup in the win.  USC’s Robert Woods had nine catches for 89 yards, including an overtime touchdown, one carry, two punt returns for 22 yards and three kick returns for 58 yards in a 56-48 loss to fourth ranked Stanford in three overtimes.  Clemson’s Sammy Watkins had one carry for seven yards, completed a pass for nine yards, caught ten passes for 159 yards and had six kick returns for 124 yards in a 31-17 loss to Georgia Tech on Oct. 29.