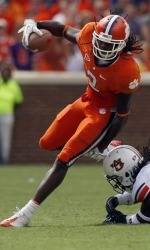 Watkins Named National Freshman of the Week by Rivals.com

CLEMSON, SC – Clemson freshman wide receiver Sammy Watkins has been named National Freshman of the week by Rivals.com for his performance against Auburn this past Saturday. Watkins caught 10 passes for 155 yards and two touchdowns in Clemson’s 38-24 victory against the defending national champions.

The native of Fort Myers, FL established Clemson freshman records for receptions, yards and touchdowns in the victory as he helped the Tigers to 624 yards of total offense, the school’s third best on record, and best against an ACC opponent.

Watkins also added seven rushes for 44 yards, giving him 199 yards from scrimmage, the most by a Clemson player since C.J. Spiller had 238 against Georgia Tech in the 2009 ACC Championship game.

For the season Watkins has 21 receptions for 292 yards and four touchdowns. He has already tied the Clemson freshman record for touchdown catches in a season. He averaged seven receptions for 97 yards per game.