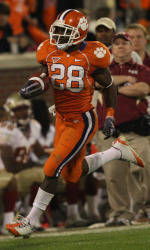 As Saturday’s football game against Florida State approaches, Tiger fans can now watch footage of three previous Clemson wins in the series via the ACC Vault on theACC.com. Click on the links below to watch the Tigers defeat the Seminoles in Death Valley in 2003, 2007 and 2009.

2007: Clemson 24, #19 Florida State 18 (Florida State fell short of making a fourth-quarter comeback in this edition of the Bowden Bowl when the Seminoles turned the ball over on downs at the Clemson 31.)WATCH

2009: Clemson 40, Florida State 24 (The Seminoles could not overcome five turnovers or C.J. Spiller’s 165 rushing yards in the Clemson victory.)WATCH