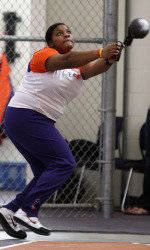 CLEMSON, SC ­- Brittney Waller won the 20-pound weight throw at the Virginia Tech Final Qualifier on Saturday in an effort to improve her national standing in the event. She moved to 18th on the NCAA’s descending order list with a season-best throw of 67’10.25″/20.68m. Waller also won the event at the ACC Indoor Championships in Boston last weekend.

Also at Virginia Tech, senior Monique Gracia won the women’s 60 hurdles title. She did not improve her NCAA seed time, but did run a solid 8.30 in the final round. In the men’s 60 hurdles, Marcus Maxey had a good time of 7.84 in the semifinals but finished eighth in the third and final round Saturday.

In the field, freshman Jameel Abdul-Mateen matched his performance from ACCs in the men’s long jump. He had a top leap of 23’11.5″/7.30 meters. In the women’s pole vault, sophomore Lauren Terstappen tied for fifth place with a clearance of 12’11”.

In Clemson’s lone action at the Alex Wilson Invitational in South Bend, IN, senior Alyssa Kulik finished in eighth place in the women’s mile run. She had a time of 4:42.97, consistent with her other performances in the event this season.

The NCAA Indoor Championships will be held Friday and Saturday, March 9-10, in Boise, ID. The accepted entries for each event will be announced by Monday, March 5.