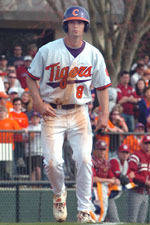 Brett Linnenkohl’s walkoff single in the ninth inning gave Wake Forest a 6-5 victory over #14 Clemson on Saturday in front of 1,227 fans at Hooks Stadium. The Demon Deacons, who evened the series, improved to 21-17 overall and 8-9 in the ACC. The Tigers fell to 24-10 overall and 9-5 in ACC play.

Wake Forest’s win snapped Clemson’s 17-game winning streak in the series dating back to 2002. It was also the Tigers’ fifth road loss of the season, three of which have been on a walkoff hit.

Eric Niesen (4-3) picked up the win in relief. The hard-throwing lefthander allowed two hits, no runs, and two walks with three strikeouts in 3.2 innings pitched. Alan Farina (2-1) was the tough-luck loser. In 3.1 innings pitched in relief, he allowed just one hit, one run, and one walk with five strikeouts. However, the one walk he allowed came to the leadoff batter in the ninth inning, and that baserunner scored the winning run.

The Tigers’ Winston-Salem-area connection had another outstanding game. D.J. Mitchell (Rural Hall, NC) was 2-for-3 with two RBIs, a walk, and stolen base. Addison Johnson (Pfafftown, NC) added a run-scoring single and made a spectacular diving catch in left field in the first inning. Linnenkohl had three of the Demon Deacons’ 10 hits.

Allan Dykstra scored the game’s first run when he led off the fourth inning with a solo homer to right field, his 14th of the season.

Clemson tied the score in the fifth inning. Alex Burg and Mitchell hit one-out singles. Two batters later, Johnson lined a two-out single to right field to score Burg. The Tigers could not take the lead, as Johnson was picked off first base. It was Garrett Bullock’s 10 pickoff the season.

A two-out rally and some well-placed hits allowed Wake Forest to regain the lead in the bottom of the fifth. Austin Jones dribbled a two-out single down the third-base line and Linnenkohl followed with a fly ball to shallow left-center that fell for a single, as Jones moved to third. Ben Terry then laced a 1-2 pitch through the left side for a run-scoring single. Dykstra followed with another single through the left side to plate Linnenkohl. Michael Murray drove home Terry with a line-drive single to left-center. The Demon Deacons totaled five straight hits with two outs to take a 4-1 lead. They were also 1-for-18 with runners on base in the series before they hit four consecutive singles with runners on base in the inning.

Clemson came right back and took the lead in the sixth inning thanks to two two-run doubles. Brad Chalk led off with an infield single and Taylor Harbin doubled down the right-field line, as pinch-runner Wilson Boyd advanced to third. After Marquez Smith struck out, Andy D’Alessio walked to load the bases. Doug Hogan then lined a double to right field to score Boyd and Harbin. After Burg walked to load the bases again, Niesen entered the game for the Demon Deacons. Mitchell greeted Niesen with a one-out double high off the wall in left field to score D’Alessio and Hogan. However, Burg could not score from first after the ball bounded back towards the infield, and Clemson could not plate any more runs in the frame.

The Tigers’ 5-4 lead was short-lived, as Evan Ocheltree led off the bottom of sixth inning with an opposite-field, solo home run down the left-field line, his sixth long ball of the year.

In the bottom of the ninth inning, Tyler Smith led off with a walk after being down 1-2 in the count. Before Farina threw a pitch to Jones, Farina turned to throw to first base. But D’Alessio was charging to cover a potential bunt and no Tiger was covering first, as Farina held on to the ball. Therefore Farina balked and Smith advanced to second with no outs. Jones later bunted a two-strike ball foul for out #1. In came Stephen Clyne for the Tigers, and Linnenkohl laced a single over the head of Johnson, who was playing a shallow left field. Smith easily scored the winning run from second base.

Clemson and Wake Forest will conclude the series on Sunday at 12:00 PM.