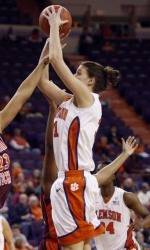 Wake Forest Pulls Away from Clemson on Senior Night

CLEMSON, SC – Four Clemson players saw their final action in Littlejohn Coliseum until they walk the stage at graduation, but Brittany Waters and Wake Forest took down Clemson, 86-64, on Thursday night in Clemson. The Tigers (10-18, 3-10 ACC) closed the home portion of their schedule at 8-8 on the season, as Wake Forest (13-16, 4-9 ACC) got revenge from an overtime loss to Clemson earlier in the season.

“Wake Forest did a really good job of sticking to their gameplan,” said head coach Itoro Coleman, who fell to 1-1 against Wake Forest. “I felt we were well prepared, but we had a couple of miscommunications on defense, and turned the ball over and got behind.”

While it was Clemson’s senior night, it was Wake Forest senior Brittany Waters who stepped up to decide the game. Waters netted 40 points – the first time an opponent has scored 40 points against Clemson since 2005 – and had 26 in the second half, as Wake overcame a 34-32 halftime deficit to win in Littlejohn. The game mirrored that of the earlier matchup between the teams, when Clemson overcame an 11-point halftime deficit to win in Winston-Salem.

Senior guard Sthefany Thomas had 14 points to lead Clemson, and she moved into fourth on Clemson’s all-time three-pointers list with two. She filled up the stat sheet, grabbing six rebounds, handing out five assists, and nabbing three steals, against only one turnover.

Jasmine Tate had seven points and eight boards, including six on the offensive end to lead the Tigers. Leading scorer Kirstyn Wright was held to just seven points on 3-9 shooting, and she handed out five assists.

Clemson outrebounded Wake Forest, 40-36, but the Demon Deacons were remarkably efficient with their second chances, scoring 20 points on 11 offensive rebounds. Clemson shot 41.4 percent from the floor in the game, their best figure since Jan. 30. The Demon Deacons entered the contest shooting 21.4 percent from three point range on the road, but the nailed nine on Thursday, including 6-13 in the second half.

The Lady Tigers looked to be in control early, as they took a 30-20 lead with 4:19 to play in the first half after scoring seven points in just over a minute, and a 17-2 run overall.

Wake responded with a 12-4 run to close the half, capped by a three from Waters with 4.0 seconds to play in the half. Waters went into the break with 14 points. Thomas had nine of her points in the frame, also adding five rebounds, three assists, and three steals. The Demon Deacons were just 3-15 from beyond the arc, and Clemson turned it over just seven times, but the late hot shooting kept the game close.

Clemson held a 44-40 lead on a pair of free throws from Shaniqua Pauldo, but Wake went on a 27-7 run over the next eight minutes to take a 67-51 lead with 7:47 left. The Deacs made 14-16 from the line in the second half in pulling away, as Waters the only Wake Forest player to make a field goal in the final ten minutes of the game.

Clemson will close out the 2010-11 regular season in Tallahassee on Sunday as they take on nationally-ranked Florida State. The ACC Tournament starts in Greensboro, NC on Mar. 3.